Era of the Great Voyage 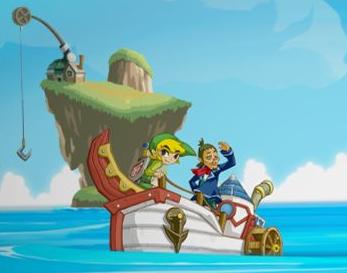 The events of The Great Voyage take place some time after the events of The Wind Waker. After Link successfully defeats Ganondorf, him, Tetra, and the rest of the crew leave the Great Sea in search of a new Hyrule, at the King of Hyrule's request.

After the defeat of Ganondorf, Link, Tetra, and her crew set off on a journey to find a new Hyrule.[1] After a couple of months of searching the vast oceans,[2] they come across a mysterious ship known as the Ghost Ship.[3] The crew were initially investigating the area due to the account of several missing ships and the possibility of treasure. During the appearance of the cursed ship, Tetra, in suspicion, goes aboard the ship and is, in turn, kidnapped.[4] Link attempts to set off after her, only to fall into the depths of the sea.[5]

Adventure on the S.S. Linebeck

Link finds himself washed upon the shore of a mysterious Island.[6] He soon comes across a fairy named Ciela, who forms a companionship with the young hero.[7] Link meets with a mysterious old man named Oshus, who gives the hero hints on how to find the Ghost Ship.[8] Link then teams up with Linebeck and uses his ship as a ways to navigate the ocean.[9] Link finds the Spirit of Power and the Spirit of Wisdom and is able to successfully pursue the ship.[10][11] After boarding, Link finds out that Tetra has been turned into stone.[12] After returning to Oshus, he reveals himself to be the Ocean King[13] and tells Link this was the work of the evil phantom Bellum.

In order to defeat Bellum, Link needs to forge the all powerful Phantom Sword. The young hero successfully finds the three Pure Metals and is able to obtain the Phantom Sword. With the adequate power now in his hands,[14] Link descends the many floors of the Temple of the Ocean King.[15] Using the Phantom Hourglass, Link reaches the bottom floor were he encounters Bellum. Link defeats the Evil Phantom and peace restores to the World of the Ocean King. With Tetra now back to her form,[16] her and Link depart however they soon realize that only ten minutes had passed.[17] With the pair now reunited with the rest of the crew they return on their quest to find a new Hyrule.[18]