From Zelda Dungeon Wiki
Jump to navigation Jump to search
Want an adless experience? Log in or Create an account.
Adult Timeline 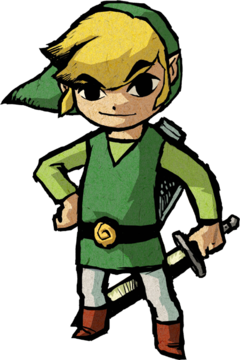 The Adult Timeline is one of three branches of the series continuity, following the Adult Ending of Ocarina of Time. The games in this timeline include Ocarina of Time, The Wind Waker, Phantom Hourglass, and Spirit Tracks.

The Era of the Hero of Time (Adult Era)

The Adult Timeline starts toward the beginning of Ocarina of Time, when Princess Zelda first meets Link and instructs him to gather the Spiritual Stones and open the Door of Time in an effort to beat Ganondorf to the Triforce.[citation needed]

The Adult Timeline portion of Ocarina of Time consists of Link completing the remaining dungeons after he has pulled the Master Sword from the Pedestal of Time. This later leads onto the defeat of the Demon King Ganon, and culminating in the Adult Ending. Zelda sends Link back in time, causing the creation of the Child Timeline when Link tells young Zelda abouts the events of the future and Ganondorf is captured, but she remains on the Adult Timeline where Link no longer exists and Ganon is sealed in the Sacred Realm.

Once Zelda has sent Link back into the Child Timeline, she replaces the Master Sword back into the Pedestal of Time, thus sealing the Door of Time.

The Era without a Hero

Main article: Era without a Hero

Many years after the resealing of the Door of Time, Ganondorf breaks the bonds holding him in the Sacred Realm, and once again attempts to take over Hyrule. The people of Hyrule pray for Link, the Hero of Time, to return and once again vanquish Ganondorf, but with Link being in the Child Timeline, this is impossible. Left hopeless, King Daphnes Nohansen Hyrule turned the fate of the kingdom of Hyrule over to the gods.

The gods warned several inhabitants of the kingdom to flee to the highest mountains, and then they flooded all of Hyrule in order to rid the kingdom of Ganondorf and his evil minions. This even became to be known as the Great Flood. King Daphnes Nohanson Hyrule was also sealed away on the ocean floor, but his daughter, Zelda, takes a piece of the Triforce of Wisdom to the surface, while the other piece remains with King Daphnes.

The Era of the Great Sea 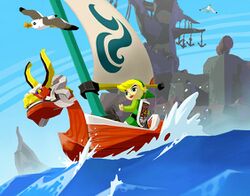 Centuries later, the seal held on Ganondorf weakens and the Evil Demon breaks free and the events of The Wind Waker follow.

Ganondorf attacks the Wind and Earth temples, and kills their respective sages. This action was done in order to diminish the power of Ganondorf's one weakness, the Master Sword. The former Demon King built his base of operations within the Forsaken Fortress. He ordered the Helmaroc King to search for Princess Zelda across the vast seas. King Daphnes Nohansen Hyrule is ordered by the gods to reawaken from his sleep at the bottom of the sea in order to put an end to Ganondorf's plans. He disguised himself as the King of Red Lions. He begins to search for Link, the new Hero, and Tetra, the descendant of King Daphnes Nohansen Hyrule.

Link first comes tangled with Ganondorf's devilish plot when his sister, Aryll, gets taken by the menacing bird. Link, now graced with the Hero's Clothes, teams up with a local pirate, Tetra, and her crew to go off in search of Aryll. Link encounters Ganondorf atop the Forsaken Fortress; however, he shuns the young hero. Washed upon the shore of Windfall Island, Link meets up with the King of Red Lions and teams up with the disguised King in order to find three Sacred Pearls. These Pearls allow the hero access to the Tower of the Gods, where he finds access to the sunken Hyrule. This is where Link obtains the famed Master Sword. However, the Blade of Evil's Bane is heavily underpowered, contrary to its former glory.

Link travels to the two temples and finds the incarnations of the ancient sages, thus unlocking the true power of the Master Sword. With the true power now held within the Hero's hand, he could finally face off with Ganondorf. However, Link has to first navigate the vast ocean to find the eight fragments of the Triforce of Courage. Link later goes onto confront Ganondorf in Ganon's Tower. With the help of Tetra, now revealed to be Princess Zelda, he kills the evil demon thus returning peace to the Great Sea. This concludes The Era of the Great Sea, along with the events of The Wind Waker.

The Era of the Great Voyage 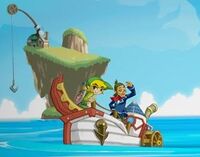 Link and Linebeck sailing the seas

After the defeat of Ganondorf, Link, Tetra, and her crew set off on a journey to find a new Hyrule. After a couple of months of searching the vast oceans, they come across a mysterious ship known as the Ghost Ship. Tetra, in suspicion, goes aboard the ship and is, in turn, kidnapped. Link attempts to set off after her, only to fall into the depths of the sea.

Link wakes up on Mercay Island, in the World of the Ocean King, where he comes across a fairy named Ciela, who later becomes the young hero's companion. Link sets out on his mission to rescue Tetra with Linebeck and his ship, where he travels over the vast ocean in search of the Ghost Ship. After finding the Spirit of Power and the Spirit of Wisdom, the young hero can successfully pursue the cursed ship. They eventually find it and rescue Tetra, but she has now been turned into stone. Oshus reveals this is the work of the evil phantom Bellum and that Link must locate the three Pure Metals in order to fuse the Phantom Sword.

With sword in hand along with the power of the Phantom Hourglass, he tackles the many floors of the Temple of the Ocean King. Within the depths of the temple, the young hero encounters the evil entity known as Bellum. Link defeats Bellum, and returns to Tetra's ship with Tetra. Tetra's crew tells them that only ten minutes had passed, implying that this was all a dream. However, Linebeck's ship can be found sailing in the background, which suggests that their adventure may well have been a reality.

The Era of Hyrule's Rebirth 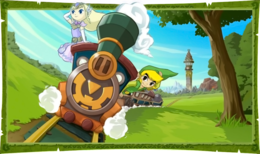 Link and Princess Zelda on the Spirit Train

Link and Tetra along with their crew, sailed in search for a new land fitting to host the Kingdom of Hyrule. They eventually find a new land worthy of such a feat. In this new continent, there stood a tall tower called the Tower of Spirits, and across the land, there were the Spirit Tracks, which connected the many realms throughout the land. New Hyrule flourishes, and a large kingdom is built, set to lead the new continent to prosperity.

One hundred years after New Hyrule is founded, the tracks across the land begin to vanish. Princess Zelda decided to hire a young boy, named Link, in order to investigate the Tower of Spirits. She hands him the Recruit Uniform, based on the same outfit that the Hero of Winds once wore. On the way to the Tower of Spirits, Link found out Chancellor Cole's true intentions. Cole intended to revive the Demon King, known as Malladus. The evil demon was previously sealed atop of the Tower and Cole ordered his assistant, Byrne, to take the Princess to the Tower in order to release Malladus. Princess Zelda was able to separate her spirit from her body in order to prevent these events. She teamed up with Link and helped the young hero reach Anjean, who gave the pair instructions on how to restore the Tower.

Link traversed across the land in the Spirit Train. The young hero had to restore the barriers within the many temples across New Hyrule. This allowed him access to the top of the Tower, where both he and Princess Zelda encountered Malladus in the Dark Realm. Upon the death of the Demon King, Zelda's spirit was returned to her body and the Lokomo ascended into the heavens. With the Demon King now defeated, peace was restored to the new continent allowing the Kingdom to thrive once again.