Era without a Hero 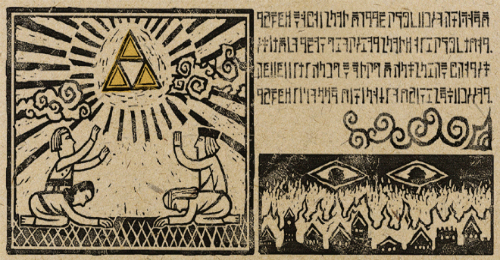 The Era without a Hero details the events that follow the Adult Ending of Ocarina of Time. Due to Link being sent back to relive his childhood by Princess Zelda, it caused a split in time. This split created two distinct paths in time, the Adult Timeline and the Child Timeline. Due to Link not being present on the Adult Timeline, it meant no hero was present when Ganon's seal weakened.

The Hero Returns to his Time

Following the defeat of the Demon King Ganon, Princess Zelda and the remaining Sages seal the Evil King away.[1] The Princess feels bad that Link missed out on his childhood as he was kept in the Temple of Light for seven years. She in turn used the Ocarina of Time to send Link back to his own era.[2] With peace now restored to the Kingdom, the Master Sword was laid to rest in the Temple of Time[3] and the Hero of Time's story was passed down.[4]

The Return of the Demon King

Following a brief period of peace in Hyrule, Ganon's seal began to weaken and he returned to the surface from the depths of the ground and once again shrouded Hyrule in darkness.[5] The people of Hyrule prayed that the legendary hero would return to save the land from darkness, but he was nowhere to be found.[6]

The King of Hyrule, Daphnes Nohansen Hyrule, was left hopeless. The King then decided to leave the fate of Hyrule in the hands of the Goddesses.[7] The Goddesses of legend informed the people of Hyrule to climb to the mountaintops before they proceeded to flood the Kingdom and the Demon King in the process.[8] Daphnes decided that he was to stay within the flooded Hyrule and he instructed the Princess to split the Triforce of Wisdom into two separate pieces and to flee to the surface of the ocean.[9]