From Zelda Dungeon Wiki
Jump to navigation Jump to search
Want an adless experience? Log in or Create an account.
The Imprisoning War 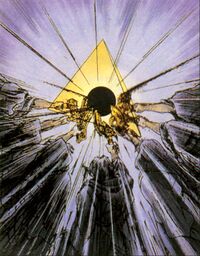 The Imprisoning War, or Seal War, is the conflict described in A Link to the Past's backstory which results in the Seven Wise Men placing a seal on the Sacred Realm, trapping Ganon inside.

The causes of the war trace back to Ganon's intrusion into the Sacred Realm. The A Link to the Past manual originally described that a band of thieves led by Ganondorf[2] stumbled upon the entrance to the Sacred Realm and fought and killed each other over the Triforce.[3]

However, this has since been retconned by the Hyrule Historia, which inserts Ocarina of Time - which hadn't yet been conceived at the time of the manual's writing - as the backdrop for Ganon's presence in the Sacred Realm. According to the Hyrule Historia, Ocarina of Time has a third ending which was not shown in the game. It involves Link being defeated in the final battle with Ganon, who then collects the entire Triforce before being sealed in the Sacred Realm by Zelda and the other Sages.[4]

Regardless of how Ganon entered the Sacred Realm, his wish on the Triforce caused the realm to transform into the Dark World.[5] After a while, his evil presence began to seep back into Hyrule.[6][7] Greedy people were lured into the Dark World, never to return.[citation needed]

Decline of the Hylians

Hylians were very common in Ocarina of Time, but by the time of A Link to the Past they became merely legend.[citation needed] The Hyrule Historia suggests that their bloodline was greatly diminished after the Imprisoning War.[8] Whether this is a direct result of the devastation caused by the war or a result of the passage of time is uncertain.