From Zelda Dungeon Wiki
Jump to navigation Jump to search
Want an adless experience? Log in or Create an account.
Great Calamity 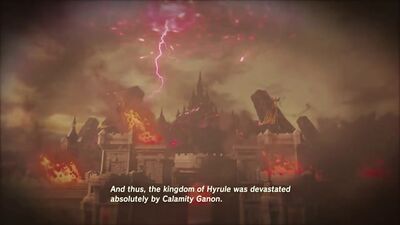 The Great Calamity was an event in Breath of the Wild where Calamity Ganon rose, possessed the Divine Beasts and Guardians, killed the Champions and destroyed the kingdom of Hyrule before being temporarily sealed by Princess Zelda.

The return of Ganon had been predicted for some time; leading to excavations that uncovered ancient technology, which Hyrulean scientists worked hard to make sense of, which reputedly had helped a hero wielding the sword that seals the darkness and a princess with a sacred power to defeat Ganon ten thousand years before. King Rhoam also pushed his daughter, Zelda, to develop the "sealing power" innate to females of the royal line without success. 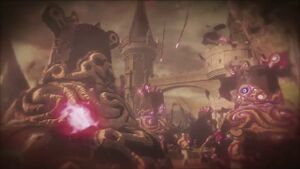 What was not predicted was that, when Ganon emerged from beneath Hyrule Castle, it would take control of the ancient technology - the smaller Guardians using Malice; and the huge Divine Beasts using four Malice-created proxies, the Blight Ganons, killing and trapping the spirits of their Champion pilots Daruk, Mipha, Revali and Urbosa within. 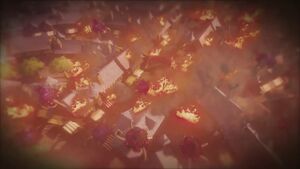 Everyone within Hyrule Castle, including the King, and many outside were killed in the process, essentially destroying the Kingdom of Hyrule and causing scars which would last a century, as the ruins of settlements including Hyrule Castle Town continued to litter the landscape. Hateno Village was notable as one of the few places to escape the Calamity.

Amongst the survivors of the initial wave of attacks were the Princess and her appointed knight, Link, the current holder of the Master Sword. While he comforted her when she despaired at the losses, ultimately he would fall in battle attempting to protect her at the Ash Swamp. Seeing him collapse would finally trigger her sealing power, disabling all the Malice-fuelled Guardians at the location, but too late to save him. At the instigation of the voice within the Master Sword, she had two Sheikah warriors take him to the Shrine of Resurrection to save his life, then took the Master Sword itself to Korok Forest, to sit in a pedestal in front of the Great Deku Tree to recover. 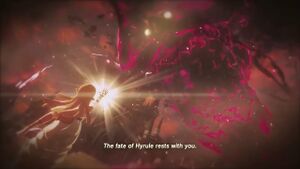 Finally, she would face Ganon alone in Hyrule Castle, and sealed it in a stalemate which left them both trapped for a hundred years, bringing the Great Calamity to a temporary end.