From Zelda Dungeon Wiki
Jump to navigation Jump to search
Want an adless experience? Log in or Create an account.
Ash Swamp 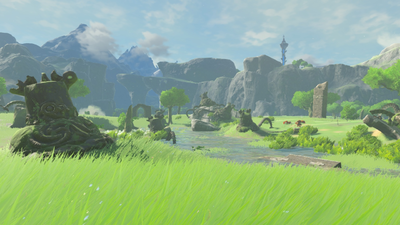 The Ash Swamp is a location found in Breath of the Wild in the western half of Blatchery Plain[1].

The swamp is situated just northeast of the Dueling Peaks Stable, on the west side of Blatchery Plain. It is a marshy terrain with small ponds and old ruins found throughout the area. The swamp is littered with inactive guardians, although there is a single Decayed Guardian to the northwest that will come alive when Link draws near.

In the center of the Swamp, Link can find the Recovered Memory titled Zelda's Awakening. This clip shows Link doing battle with guardians during the Great Calamity. It is here that Link fell in battle and Princess Zelda's power was awoken, defeating all of the guardians in the process. Two Sheikah Guards appeared, and Zelda instructed them to take Link to the Shrine of Resurrection.