From Zelda Dungeon Wiki
Jump to navigation Jump to search
Want an adless experience? Log in or Create an account.
Zelda's Awakening 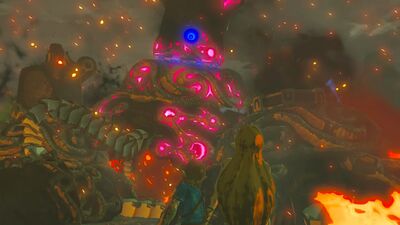 Zelda's Awakening is one of the Recovered Memories found in Breath of the Wild.

"Link continues to fight, protecting Zelda from a pack of pursuing Guardians, but collapses in exhaustion, terribly wounded. As the Guardians close in, Zelda stands against them and finally unleashes her sealing power."

The memory begins in the Ash Swamp where it is found. The grass is burning, and partially destroyed Guardians litter the ground. A group of Guardian Stalkers, now corrupted by Calamity Ganon, skitter across the landscape, heads swiveling as though searching for something.

Zelda and Link, covered in mud and dirt, face them down, but Link is clearly exhausted, brought to one knee and panting heavily, leaning on the equally worn-out Master Sword. Zelda, standing behind him, tells Link to run, that he needs to leave and save himself and she would be fine without him. Link ignores her and staggers to his feet, pulling the tip of the Master Sword from the ground as a corrupted Guardian spots the pair and approaches, clambering over the wreckage of its fellows. As the Guardian looms over them, beginning to charge its eye beam, Zelda pushes Link out of the way, reflexively defending him with her hand in front of her. The symbol of the Triforce begins to glow on her outstretched hand, and in a burst of light the influence of Ganon leaves the Guardians in the area, and they all power down and collapse.

Zelda looks at her hand, surprised, breathlessly wondering if that was the sealing power she had been working so long and hard to unlock. She cannot wonder for long, however, because with a splash Link collapses behind her, and she turns to see him prone in the mud. She rushes to his side, kneeling to cradle him and insisting that he'll be okay. Link levels a disbelieving look at her before closing his eyes, either unconscious or dead. Zelda clutches Link's limp form closer, beginning to dissolve into despair, when the Master Sword flashes with a dim glow and makes a strange noise. Zelda looks over at it, and seems to understand what it is telling her, despite it using no coherent language that the player can understand.

A man's voice shouts for the princess, and two masked Sheikah warriors dash over to where she is kneeling with Link. A new determination in her eyes, she orders the pair to take Link to the Shrine of Resurrection, and that they must do this immediately or risk losing Link forever. Firmly, she tells them that his life is in their hands now. The memory ends with a view of a nearby collapsed Guardian Stalker, its eye and body lights flickering faintly.

Breath of the Wild Recovered Memories[edit][hide][show]
Retrieved from "https://www.zeldadungeon.net/wiki/index.php?title=Zelda%27s_Awakening&oldid=449864"
Category: