From Zelda Dungeon Wiki
Jump to navigation Jump to search
Want an adless experience? Log in or Create an account.
Champion Revali's Song 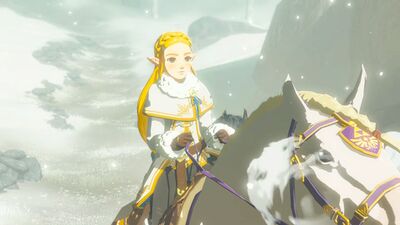 "Zelda tracks down Rito warrior Revali and enlists him to pilot the Divine Beast Vah Medoh. During their encounter, she witnesses an impressive display of his archery skills, as well as the hidden side of his personality that makes it all possible."

The memory begins with Zelda, riding ahead of an entourage of guards toward the Flight Range outside of Rito Village. It is snowing gently as they approach Revali, kneeling on the stones at the edge of the pit at the Flight Range, panting and exhausted. He shifts his wings once, slightly, engaging the power of Revali's Gale, and leaps up, attempting to soar upward on the draft created by his power. For a moment he glides in the updraft, but the twisting winds surrounding him catch him and throw him off balance, yanking him from the air and tossing him toward the ground, trailing feathers. He lands on the stone with a thud and struggles to his feet, gasping and berating himself aloud for failing to stay in the eye of the whirlwind. He then notices Zelda standing a little ways off, and tells her it's rude to eavesdrop.

Princess Zelda apologizes, and tells Revali the people in Rito Village told her she could find him here. Before she can say anything else, Revali predicts that she needs him to kill Calamity Ganon, and that he will gladly bring about the end of the beast. Zelda thanks him, excited and relieved that he will join the cause, and begins to express her certainty that they can defeat Ganon by working together. Revali cuts her off before she can finish, and turns away, engaging his Gale ability once again and soaring into the sky. The twisting winds of the updraft almost catch at him again, but he steadies himself and flies above the draft, hanging high in the sky for a moment before diving down towards the Flight Range. He pulls the Great Eagle Bow from its place on his back and nocks a trio of Bomb Arrows, releasing them to hit three of the targets on the wall of the Flight Range. He lands at the bottom of the pit and engages his Gale ability again, this time soaring upwards easily and making an acrobatic spectacle of flying around the range and hitting the targets with his Bomb Arrows. Zelda watches the display with amazement, and Revali ends it by landing on the railing of the Flight Range's wooden landing platform. He specifies that he knows that he will play the biggest part in helping Link, using a derisive epithet to refer to him, and that if he loses his confidence after seeing Revali in action, the Rito Champion can't be held responsible. The memory ends with Revali looking smugly at Zelda from his perch after making this declaration.

Breath of the Wild Recovered Memories[edit][hide][show]
Retrieved from "https://www.zeldadungeon.net/wiki/index.php?title=Champion_Revali%27s_Song&oldid=382638"
Category: