This article is about the Recovered Memory. For the second part of the Breath of the Wild DLC Expansion Pass, see The Champions' Ballad. 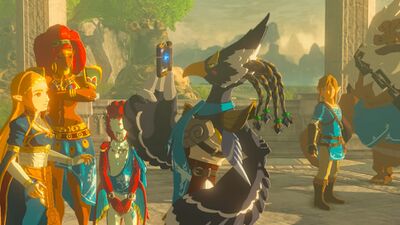 "Link, Mipha, Daruk, Revali, and Urbosa are called to Hyrule Castle and formally appointed as Champions by the king. After the ceremony, they congregate at the castle's garden where Mipha asks Zelda for a favor... to use the Sheikah Slate's Camera for a special picture."

The memory cuts to the Champions in a gazebo on the castle grounds. Daruk stretches and cracks his joints, complaining lightly of the fatigue he feels after formal events like the ceremony they just held. Meanwhile, Revali plucks the Sheikah Slate from Zelda's hands and remarks about it as he looks over it appraisingly before handing it off to Mipha. Zelda explains that it has more uses than they had originally thought, but they had yet to uncover all of the Slate's mysteries, prompting Urbosa to mention the camera feature Zelda had recently shown her. Urbosa does not, however, call the feature by name, and in fact comments on how unusual it was that it could do such a thing. Mipha is amazed and says she would love to witness the feature in action. Mipha goes on to ask Zelda for a favor as she looks back at the other Champions.

The memory cuts again to the perspective of Purah (unseen) behind the Sheikah Slate, which is open to the camera feature. The rest of the memory is through the viewfinder of the Sheikah Slate's Camera. Purah directs the Champions and Zelda, who are visible through the viewfinder, to shift positions such that she can get a good shot of all of them, telling Daruk to crouch down, Revali to get closer to the group, and reminding Zelda and Mipha to relax and smile. The six of them all shift their positions slightly with minimal commentary and grumbling (Revali does most of the grumbling), until Purah is happy with the shot. She zooms in a bit, and tells the group to smile, brightly saying "Click, snap!" to let them know she was taking the picture. Right before the shutter closes, Daruk slings his arms around the rest of the group, pushing everyone stumbling inward, so that the actual picture is much less posed than was apparently planned. The memory ends on a still image of the final photograph, with Daruk and Urbosa smiling brightly in the back of the group as the other four are caught midway through catching themselves from falling, with various looks of surprise on their faces.

Breath of the Wild Recovered Memories[edit][hide][show]
Retrieved from "https://www.zeldadungeon.net/wiki/index.php?title=The_Champions%27_Ballad_(Memory)&oldid=439040"
Category: