From Zelda Dungeon Wiki
Jump to navigation Jump to search
Want an adless experience? Log in or Create an account.
Vah Naboris 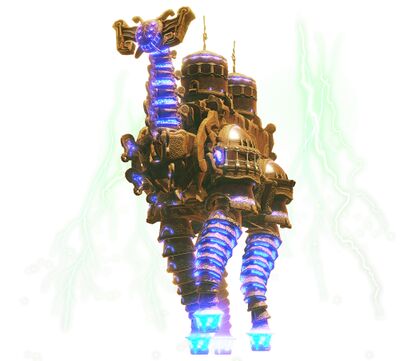 Vah Naboris is one of the Divine Beasts from Breath of the Wild and Hyrule Warriors: Age of Calamity. A Sheikah creation for use against Ganon, it was buried when technology was banned, and excavated 10,000 years later in the reign of King Rhoam Bosphoramus Hyrule.

Princess Zelda formally offered the role of Gerudo Champion and pilot of Vah Naboris to Urbosa in the Gerudo Chief's throne room in Gerudo Town. Urbosa accepted most definitively.  Champion Urbosa's Song  Some time later, she would caress an exhausted, dozing Zelda on top of Vah Naboris. When Link arrived, she lectured him about the unwarranted stresses she felt Zelda was under, and the need to protect the Princess.  Urbosa's Hand

After Ganon re-emerged, Urbosa was sent to Vah Naboris with the task of assisting Link  Return of Calamity Ganon , but Thunderblight Ganon infected Vah Naboris with Malice and killed Urbosa, trapping her spirit there for one hundred years.  Divine Beast Vah Naboris .

A century later, with the malice-controlled Naboris causing problems in the Gerudo Desert, the young Gerudo Chief Riju used the power of the Thunder Helm to protect Link; allowing him to damage the Divine Beast's feet with Bomb Arrows and give him a chance to board. Once there, he ultimately defeated Thunderblight Ganon and freed Urbosa's spirit. Divine Beast Vah Naboris

Urbosa then took Vah Naboris to Spectacle Rock and locked onto Hyrule Castle. When Link confronted Calamity Ganon there, she fired, costing the Calamity one-eighth of its maximum health.

In the Urbosa, the Gerudo Chief, after Link and his allies defeat the Yiga Clan, Urbosa accepts her call to become Divine Beast Vah Naboris's pilot due to the fact that the very cult is seeking to revive Calamity Ganon, causing problems with her people and Hyruleans alike, and for her late friend's daughter's sake.

In the Destroy the Yiga Clan! Scenario, when Urbosa takes advantage of the Sheikah Towers' abilities to distill regional maps and reveal enemy locations to track down the Yiga Clan Hideout, she uses Vah Naboris to drastically reduce the armies of the Yiga Clansman with utilization of electricity generated from its humps and stampeding through them, which allowed the party to attack from the inside.

In the Air and Lightning Scenario, Urbosa, having witnessed Calamity Ganon's return heads to Vah Naboris to launch the counterattack, but she finds Thunderblight there and becomes trapped inside the Divine Beast. Urbosa fought it as much as she could and finds herself in a losing battle against it as she is pushed into the lower levels where she kneels in exhaustion as Thunderblight Ganon charges at her with its electric blade. Just before Urbosa could lose her life, Terrako's Gate of Time opens as Riju, and Patricia burst out and rams into Thunderblight Ganon before it could reach Urbosa. It was because of Riju and Patricia's support to Urbosa that Link, and his friends arrive in the nick of time to slay Thunderblight Ganon before either of them are killed. As Riju joins the group, Urbosa strikes the top of Mt. Rhoam with Naboris's lightning to release the updraft so they can reach Vah Medoh and protect Revali and Teba from Windblight Ganon.

In the Each Step Like Thunder Scenario, Urbosa and Riju rise to the challenge of fighting vast numbers of Guardians and monsters that surround Fort Hateno to keep the stronghold from falling. After Vah Naboris starts to lose power, more enemy reinforcements appear at the worst time, but thankfully the other Champions, Revali, Mipha, and Daruk came to the rescue on Vah Medoh, Vah Ruta, and Vah Rudania respectively, as they blast away the second wave.

In the All Hyrule, United Scenario, Vah Naboris appears with the other Divine Beasts as Purah supercharges the Sheikah Towers to unite the armies all around Hyrule. Once the monsters are killed to weaken the barrier surrounding Hyrule Castle, Urbosa opens fire with the rest of the Champions to weaken Ganon.

Breath of the Wild Key Locations[edit][hide][show]
Retrieved from "https://www.zeldadungeon.net/wiki/index.php?title=Vah_Naboris&oldid=441798"
Categories: