This article is about the story scenario from Age of Calamity. For the character which it is named after, see Urbosa. 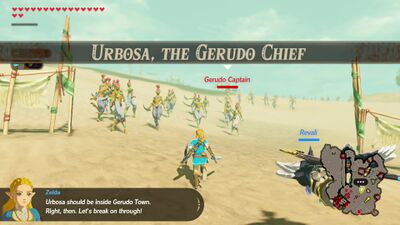 "Zelda, along with the rest of the party, sets out for Gerudo Town to ask Urbosa to become a pilot. Along the way, they suddenly come under attack by the Gerudo."

Urbosa, the Gerudo Chief is the fourth listed scenario of Age of Calamity Chapter 2, although the four main Chapter 2 scenarios can be completed in any order.

"The Gerudo lived in a settlement in the Gerudo Desert. Comprised entirely of women, they were a tribe of great might and nobility."

Attack of the Gerudo!

"The party sets out for Gerudo Town to recruit their chief, Urbosa, as a pilot of a Divine Beast. However, they are unexpectedly attacked by the Gerudo. Zelda steels herself and attempts to learn Urbosa's true motives."

Return of the Chief

"With Zelda in peril, the real Urbosa makes her appearance, and the impostor chief is revealed to be Master Kohga of the Yiga Clan. Kohga quickly summons reinforcements to the battle then abruptly leaves them to fight on their own."

Slippery as a Banana Peel!

"Urbosa and the others manage to corner Master Kohga, but they're suddenly confronted by the Yiga Blademaster Sooga. Both Sooga and Kohga disappear, though the conflict with the Yiga Clan appears likely to continue."

"In other to protect both her own desert home and all of Hyrule, Urbosa agrees to become a pilot for a Divine Beast. She also offers words of comfort to Zelda, who is feeling a mounting pressure to fulfill her duty as the days pass."

Plans for the Future

"Master Kohga and Sooga escape to their hideout. Waiting for them there is the mysterious seer Astor, as well as a black Guardian eerily similar to the model that has been accompanying Zelda."