From Zelda Dungeon Wiki
Jump to navigation Jump to search
Want an adless experience? Log in or Create an account.
The Road Home, Besieged 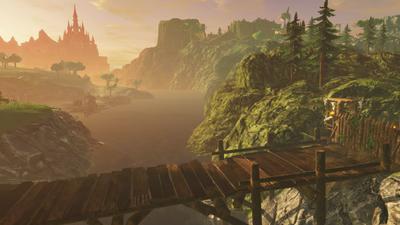 "Having finished their investigation, the party sets out for Hyrule Castle. When monsters ambush them, Link and the others fight to clear a way forward and keep Zelda safe."

The Road Home, Besieged is the second and final scenario of Age of Calamity Chapter 3. It is unlocked by completing Freeing Korok Forest, and must be completed before progressing in the story.

"With the discovery of the knight who seals the darkness, hope spread among the people of Hyrule. Yet unease lingered in the princess's heart. No matter how much she devoted herself to training and research, doubts plagued her."

A Song from the Past

"Witnessing the progress that Link and the pilots have made, Zelda is filled with doubt and worry about her own inability to succeed. The small Guardian notices this, and attempts to bolster her spirits with a lullaby..."

"Link remains as steadfast and dedicated as ever, stronger now that he is armed with the sword that seals the darkness. Zelda doubts her own abilities by comparison, and Urbosa tries to put her worries to rest by reminding her of the Great Deku Tree's words."

"The pilots of the Divine Beasts and the knight with the key to defeating Calamity Ganon... In a grand ceremony, these five heroes convened, and King Rhoam bestowed upon each the title of Champion."

"The inauguration ceremony for Link and the four Champions who will pilot the Divine Beasts comes to an end, and everyone takes in the celebratory atmosphere. An amusing interaction between the little Guardian and the others is enough to ease Zelda's worries, if only a bit."