From Zelda Dungeon Wiki
Jump to navigation Jump to search
Want an adless experience? Log in or Create an account.
Destroy the Yiga Clan! 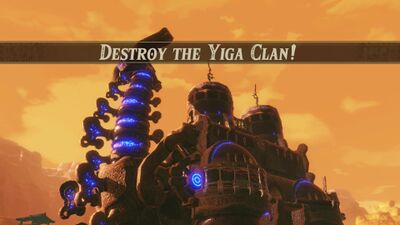 "Reclaiming the Sheikah Tower gives the party an invaluable advantage. With the Yiga Clan's hideout located, Urbosa boards Naboris and prepares to attack."

Destroy the Yiga Clan! is the second scenario of Age of Calamity Chapter 4. It is unlocked by completing Akkala Tower, and must be completed before progressing in the story.

The scenario begins with a Divine Beast Vah Naboris battle, where Urbosa must clear a path to the Yiga Clan Hideout. Once this is done, several members of the party - including Link, Urbosa and Impa - delve into the hideout and systematically dismantle the Yiga Clan and their allies, culminating in a face off with Master Kohga and Sooga.

"Now that the network of Sheikah Towers had been restored in full, the Sheikah Slate bestowed upon Zelda's party detailed knowledge of all Hyrule."

"In the process of activating the Sheikah Towers in each region of Hyrule, the party learns valuable tactical knowledge, including the location of the Yiga Clan's hideout. Aiming to take them all out in one fell swoop, Urbosa boards Vah Naboris."

"Using Purah's insights, Urbosa easily accomplished her mission. Thus were Zelda and the others witness to the immense capability of the Sheikah Towers."

The Mighty Leader of the Yiga Clan!

"The party has finally managed to corner the Yiga Clan, but Master Kohga refuses to go down without a fight–for some reason, he appears incredibly confident. After taunting the party, Kohga rushes to battle, henchmen in tow"

"Astor appears before the recently defeated Master Kohga, who is outraged that the Yiga Clan's promised victory did not come to pass. Astor simply smiles, stating that all is as it must be, and he warns the Yiga Clan not to oppose him."

"Having handled the Yiga Clan, Zelda and the party realise how truly valuable the Sheikah Towers are. Purah is eager to continue her research with her newly increased staff. Zelda offers her words of encouragement, though she remains troubled by her own lack of progress."