From Zelda Dungeon Wiki
Jump to navigation Jump to search
Want an adless experience? Log in or Create an account.
All Hyrule, United 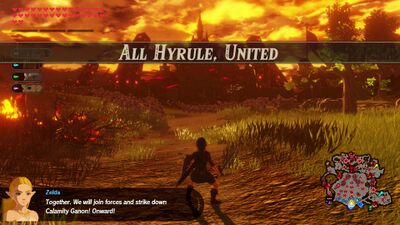 "People from all across the land have gathered on Hyrule Field. As a united force, they cut a path to Hyrule Castle in a bold attempt to defeat Calamity Ganon."

All Hyrule, United is the second scenario of Age of Calamity Chapter 7.

Princess of the Eve of the Battle

"Thanks to the newly improved Sheikah Towers, many soldiers from all across Hyrule have been able to gather together. Zelda stands at the vanguard and delivers a rousing speech to the assembled army."

"In an attempt to assuage the damage of Calamity Ganon, the Zora, Gorons, Rito, Gerudo, and Yiga Clan united with the remnants of King Rhoam's forces. All of them gathered their strength and assembled on Hyrule Field."

"The devastating barrage from the Divine Beasts strikes Calamity Ganon. Its defeat seems imminent until, suddenly, the skies turn red and the Blood Moon rises. Calamity Ganon and his minions recover, their power restored beneath the Blood Moon's light."