From Zelda Dungeon Wiki
Jump to navigation Jump to search
Want an adless experience? Log in or Create an account.
Teba 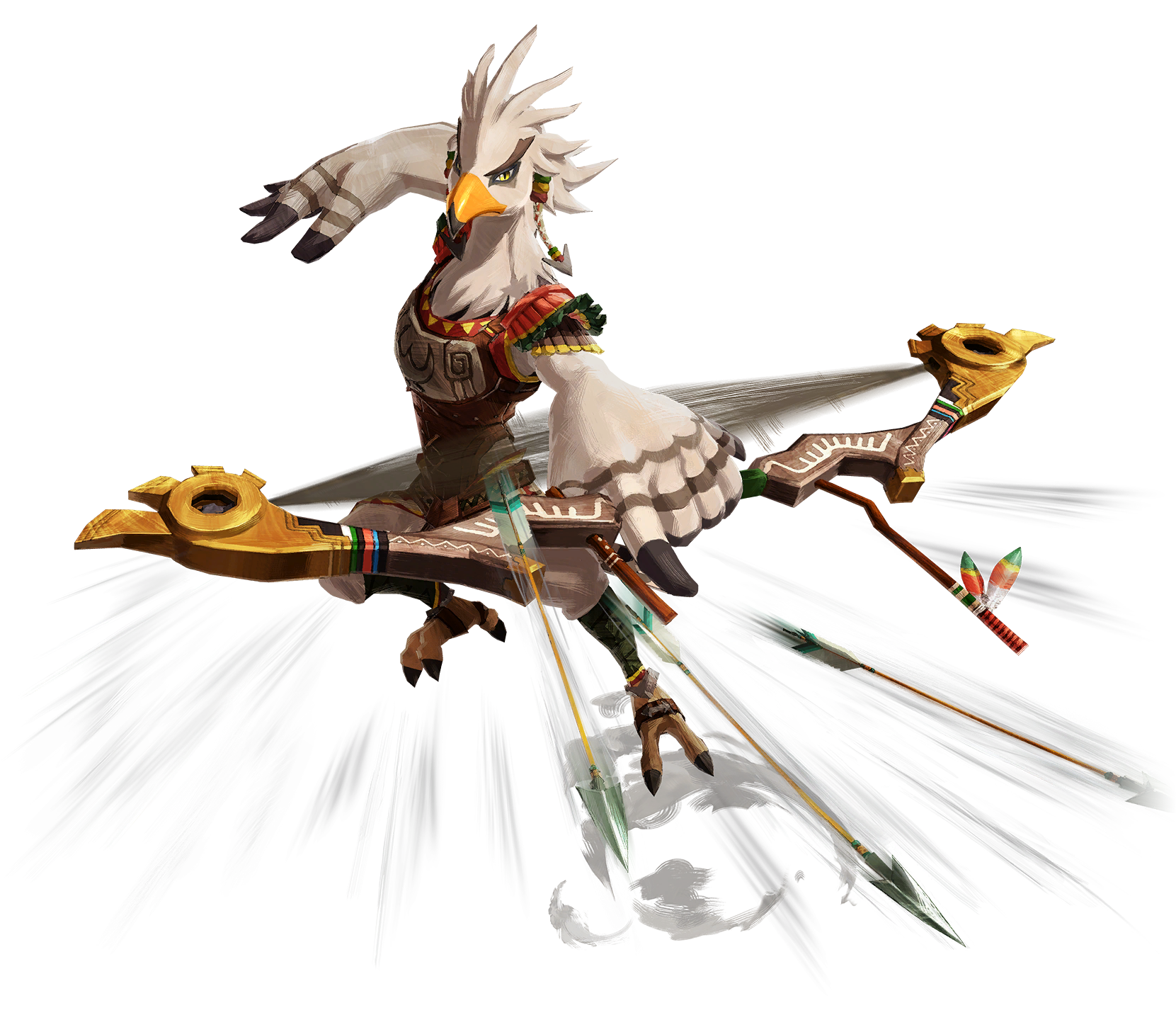 "As a Rito warrior, I can't rest until my people are safe."

— Teba, Breath of the Wild

Teba is a major character in Breath of the Wild and Age of Calamity. He is a Rito Warrior, who is the husband of Saki and the father of Tulin.

Teba spends most of his time training his aerial combat at the Flight Range. When Divine Beast Vah Medoh began rampaging around the Rito Village, shooting at any Rito that flies near it and forcing them to fly at lower altitudes rather than their preferred height, it was hurting their way of life. This unpleasant turn of events has created immense stress upon Teba and his friend, Harth and against Elder Kaneli's warnings, they head out to fight against it. It went horribly wrong when Harth's wing was injured in the skirmish and shot out of the sky while Teba barely managed to save him and takes him back to the village while Teba heads to the Flight Range to prepare for another assault.

Link is first informed of Teba by Kaneli, the Rito Village elder, who advises Link to visit him at the Flight Range if he wants to board the Divine Beast Vah Medoh, since Teba plans on attacking it alone. When the two first meet, Teba is skeptical and doesn't trust Link[2][3], and requests Link to prove his abilities through a training exercise which requires Link destroying five targets in the Flight Range, abilities which will be necessary in entering Vah Medoh.

Upon successful completion of the training exercise, Teba becomes more comfortable with letting the Hylian help out. will carry Link skyward in order for him to utilize Bomb Arrows to destroy the cannons defending Vah Medoh. During the battle, Teba takes a devastating hit to his leg; and returns to the Flight Range to recover. At this stage his role in the story has been fulfilled, and Link can enter, and rescue, the Divine Beast Vah Medoh.

After Link is successful in destroying the source of Vah Medoh's abnormal behavior, Revali then takes it to the rock spire above Rito Village to set sights on Hyrule Castle where Calamity Ganon is held. Once Link returns, Teba is grateful that they can return to their way of life, and he takes Tulin on his back and brings him to the Flight Range.

In the Air and Lightning Scenario, Teba emerges from the Gate of Time that Terrako created and intercepts Windblight Ganon by shooting arrows at its arms to prevent it from using them to shoot Revali, allowing the latter to recover and return to the fight. Teba distracts Windblight Ganon long enough and lets Revali take a shot,[4] which the latter takes aim to get payback for its ambush and shoots Bomb Arrows at it,[5] only for them to be blocked. Teba is flustered to see that it still lives,[6] but Revali assures him that their much-needed help has arrived as Link and his friends float on board and while they didn't kill Windblight Ganon,[7] they still managed to send it running, effectively saving Revali, Teba, and Vah Medoh. Urbosa and Riju join them and the former thanks Princess Zelda for backing them up and then thanks Riju for saving her life. Teba would express surprise at Revali's abrasive personality towards Link,[8][9] and he nearly makes a comment on it,[10] before Urbosa cuts him off before he could say anything hurtful about him before asking Zelda about Hyrule Castle's fate.[11] After learning about the events, Teba and Revali join forces aboard Vah Medoh to protect Western Hyrule from the surge of monsters and corrupted Guardians. Teba blasted the Guardian Skywatchers targeting Revali and shoots at another one before being pursued himself, only for Revali to shoot the pursuers with Bomb Arrows as Teba looks over at him, impressed by Revali's legendary prowess,[12] as the latter smugly puts his bow away and looks forward to unleashing the full extent of Vah Medoh's power with his signature smirk.[13] During the battle, Windblight Ganon returns with a vengeance and tries one last time to take Vah Medoh and to kill both Teba and Revali, but the duo is ready for it, and they managed to finally slay it and secured the area.

In the EX Searching Hyrule Forest Guardian of Remembrance DLC Scenario, Teba learns from Revali that a young Rito child is lost in the Korok Forest, which has him worried and pleaded him to let him join. Revali is unsure about Teba's agitated state, but he lets him tag along anyway. Teba asks for a description of the child, which Revali describes that he had white feathers like him and has a face similar to his. After searching for a while, they come across the child, which Teba recognized to be his only son, Tulin. Tulin explains that he somehow ended up in the forest and looked after by the "tiny creatures", which intrigues his father. Teba is uneasy over leaving Tulin alone until the Rito Captain offered to guard him on their way out. They meet with Revali, whom Tulin mistakes for another Rito Warrior, which Revali corrects him by stating that he is looking at the real deal. Teba introduces the child as his son, which Revali realized that they have both traveled back in time. Tulin continues to express amazement at Revali's skills which made the Rito Champion believe that he is still remembered for his feats. When they make it to their destination, which is found to be a dead end, Revali expresses some frustration that they couldn't get out without the help of the Koroks. That was until Tulin, who is revealed to have gained knowledge about the false walls from the Koroks and having knowledge of wind patterns, points out the secret passages that they weren't aware of which amazes them, and they let Tulin guide them out. After the final surge of monsters, they successfully managed to escape. Upon reaching the forest entrance, Teba tells Tulin to thank Revali since he saved his life.[14] Tulin complies,[15] and he stands in front of Revali to do so.[16] Revali smiles as he praises Tulin through telling him that he is pretty good for a little kid.[17] Tulin is overjoyed to hear that,[18] and he jumps close to Revali's face as the latter backs away nervously, while telling him that he is doing a lot of training so that he can be just like him and eventually master the Great Eagle Bow.[19] Revali sighs as he reminds Tulin that he could have lost his life to the monsters, but despite the harrowing experience he is still as happy as can be.[20] He adds that it probably won't be long before he's the master of the wind like him.[21] Teba agrees, but he adds that he must first surpass his father.[22] Tulin imitates Revali's speaking patterns,[23] making Teba laugh before controlling himself as Revali asks if that was meant to sound like him.[24] Teba is at a loss of words, when Revali chuckles which turns into full blown joyous laughter as he and Tulin follow along.[25] After they calm down, Tulin uses his own take of Revali's Gale, calling it "Tulin's Tornado" to fly into the air,[26] but he falls to the ground as Teba checks up on him,[27] while Revali chuckles again and reminds him that he still has a long way to go, affectionately calling him "kid".[28]

In the All Hyrule, United Scenario, the present and future Champions, the Divine Beasts and various soldiers of all races across Hyrule are summoned by Purah through the restored Sheikah Tower's energy that brought them to Hyrule Field. Revali looks forward to flaunting their power in all their splendor,[29] and Teba tells him to make his people proud.[30] With her surviving father's approval, Princess Zelda gives a speech and reminds them that Hyrule is their home that they must protect and as long as they are not divided but united, they are unstoppable. They take over the outposts and destroy the monsters that maintain the barrier around Hyrule Castle so that the Champions can open fire upon Calamity Ganon. Despite the Blood Moon rising to revive the fallen monsters constantly, the army managed to breach through to the castle.

In The Future of Hyrule Scenario, Teba and Revali lead the aerial army as Princess Zelda leads the forces on the ground as they zero in on the castle where Harbinger Ganon and Astor are waiting for them as the latter is on the verge of insanity as he goes on a mad rant that it was his fate to crush the kingdom under his heels. The warriors confront the revived Blight Ganons one last time before they slew them for good before taking on the villainous duo and defeating them. Outraged by another defeat at the hands of the warriors, Astor orders the harbinger to destroy them, but he ends up getting absorbed by the Malice to take on a new form. Terrako becomes possessed by the Malice and forced to turn on Link and the princess, forcing the two of them to duel it. Once it is defeated, Teba and the Champions have a moment to mourn Terrako's broken state with Zelda, who is now more determined than ever to stop Calamity Ganon once and for all before they charge upstairs into the Sanctum where the monster was waiting for them. They initially couldn't harm Ganon due to it having transformed successfully and it constantly shrugged off their attacks which Zelda tries to defeat it with her power. Her magic did bring Terrako back onto its feet and it skitters rapidly upstairs and jumps between her and Ganon, destroying itself to break down Ganon's defenses allowing the warriors to effectively harm it. When Ganon is wounded enough, Link cripples it even further with a slash of his Master Sword and Princess Zelda is able to destroy Ganon once and for all. With the people across Hyrule rejoicing over their victory, the Champions have a moment to enjoy the newly restored peace they have worked for. It was then that Terrako's blessed screw began to glow and it was sending Teba, Sidon, Yunobo, and Riju back to their own time. Teba tells Revali that it had been enlightening to see the "face behind the Champion", considering that he saw both his good and bad sides.[31][32] Princess Zelda is eternally grateful to them for all the miraculous deeds they have done for the kingdom and as they vanish, she wishes for the light to shine on their future for all time.

In the secret DLC ending, Teba, Revali, and Tulin are seen lounging at the Flight Range. Tulin was sleeping on Revali's lap, and the latter stops the blanket from blowing away as Teba watches in delight. Later, Teba and the other Champions from both the present and future gather to talk amongst themselves as Terrako happily entertains them.