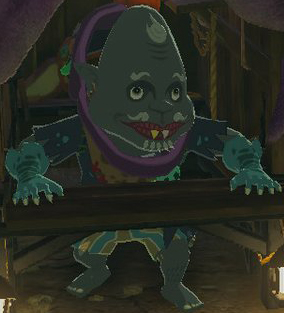 Kilton is a character featured in The Legend of Zelda: Breath of the Wild. He owns a small business, namely the Fang and Bone, where he offers Link the opportunity to purchase some of his collection of monster-related items, which include various articles of clothing, weapons, and more. He is the inventor of the currency Mon, which can only be used at his shop.[1]

Kilton can be found on the small island at Skull Lake, located just northeast of Death Mountain, at the far northwest end of the Akkala region. He will only appear there at nighttime and will disappear when day breaks. If Link is standing right where Kilton's shop appears, the shop won't actually appear. Instead, Link will need to be off in the distance and have to arrive sometimes after 9pm. While the shop does not appear after 5am, if Link is near the shop, it will remain on location. However, if Link tries to purchase anything, Kilton will close up shop for the day.

After initially talking to Kilton at Skull Lake, he will then setup shop at the various towns in Hyrule. The shops are open each night from 9pm until 5am.

Initially, Kilton only has Monster Extract, a Wooden Mop, and a Bokoblin Mask for sale. However, after each Divine Beast that Link completes, Kilton will begin to stock more items.[3]

Breath of the Wild Key Characters[edit][hide][show]