From Zelda Dungeon Wiki
Jump to navigation Jump to search
Want an adless experience? Log in or Create an account.
Korne Beach 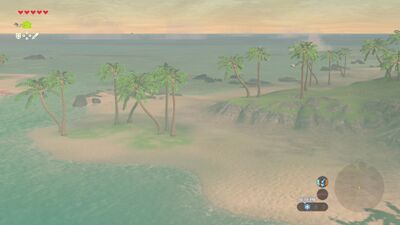 The Korne Beach is a location found in Breath of the Wild.

Korne Beach is just south of Lurelin Village, on the west side of the water. Right across the water, Link will find the Gogobi Shores to the north and the Rimba Beach to the south. Just like the weather at Lurelin Village, it rains fairly often along the beach.

Kilton's Fang and Bone shop will appear at the Korne Beach at nighttime. However, Link will first need to meet Kilton at the Skull Lake, before the shop will begin to appear elsewhere in the world.

After speak with Rozel and asking him about the ocean, this will begin the Sunken Treasure side quest. Rozel talks about the golden triangle, which are the three rocks found in the distance, south of the Korne Beach. Link can use a raft or ice blocks with Cryonis to reach the triangles. In the center, there are four treasure chests found underwater, containing two Topaz, a Sapphire, and a Thunderblade. After pulling up the treasure chests, Link can return and speak with Rozel to complete the quest.

In the water surrounding the Korne Beach, there are numerous treasure chests that Link can collect.

Follow the yellow flower trail. It begins east of the mark in the middle of a group of trees, and zigzags a little, going out of the circle of trees then returning nearby.

Follow the yellow flower trail. It begins a bit east of the marker, and zigzags a little.

Put three rocks in the big circular stone formation. You can use the rocks from the smaller rock formations around it, but also any rock found nearby.

Complete the circular stone formation and the Korok will appear.