From Zelda Dungeon Wiki
Jump to navigation Jump to search
Want an adless experience? Log in or Create an account.
Rimba Beach 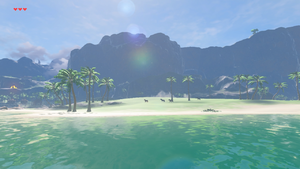 Rimba Beach is a location found in Breath of the Wild.

Rimba Beach is located just southeast of Lurelin Village. It can be found south of the Gogobi Shores, and right on the other side of the water as the Korne Beach. The palm trees in the area often have beetles attached to them and Link can find a Bladed Rhino Beetle, a Rugged Rhino Beetle, along with a handful of Energetic Rhino Beetles. There are also some wild horses roaming around in the region.

After speaking with Rozel and asking him about the ocean, this will begin the Sunken Treasure side quest. Rozel talks about the golden triangle, which are the three rocks found in the distance, southwest of the Korne Beach. Link can use a raft or ice blocks with Cryonis to reach the triangles. In the center, there are four treasure chests found underwater, containing two Topaz, a Sapphire, and a Thunderblade. After pulling up the treasure chests, Link can return and speak with Rozel to complete the quest.

Jump into the circle of seaweed/plants.

Dive into the circle.