"This small fishing village along the coast is inhabited by fishermen who make a living off the Faron and Necluda seas. There is a market that sells fish, crab, and other goods, as well as a facility in town where Link can gamble rupees on a treasure chest game, which is what a number of the local fishermen do when they can't go to sea on rainy days." 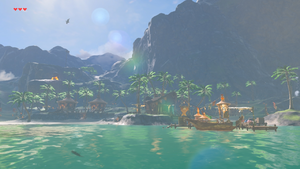 Lurelin Village is a location found in Breath of the Wild. A coastal village in south-east Faron, its main business is fishing.

Lurelin Village is an idyllic tropical fishing village in the Faron province and led by chief Rozel. It is located on the southern beaches in an inlet to the southeast. The weather in Lurelin is typically sunny with regular rain showers. Treasure is frequently found in the ocean and a favorite spot for treasure hunters. A favorite recipe of the villagers is Seafood Paella, which is made by cooking the locally found Hearty Blueshell Snail with Hylian Rice, Goat Butter, Rock Salt, and a Mighty Porgy.

Lurelin Village amenities include a general store where Link can buy fish and arrows and an inn where Link can spend the night to recover hearts. A casino can be found in the one of the tiki houses in the northeast of the village. Cloyne, who runs the casino, will accept a wager on which one of three treasure chests contains the most rupees. The more a player wagers, the greater the potential reward.

A Goddess Statue is located just southwest of the inn along the beachfront. A Cooking Pot can be found between two tiki homes to the east of the main entrance of the village, while open fires may be found southeast of the inn (before the pier where Mubs' shop is located) and on a small ridge just before reaching Gogobi Shores. Kilton can be found at night to the south of Lurelin Village at Korne Beach.

Get a rock to the roof, and complete the rock triangle. This can be difficult and there are multiple methods. Click 'Korok Seed' above for additional assistance for this seed.

This will take a few tries, so save first. You want to get this rock up to the roof of the casino. 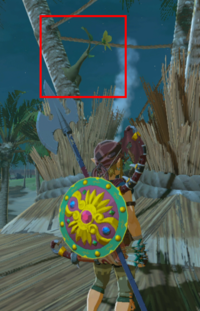 On top of the inn, there are 3 palm tree trunks. Climb around these chasing the yellow flower trail.

Climb around the tree trunks on top of the Inn chasing the yellow flowers. 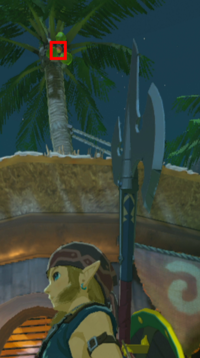 Remove the apple from between the palm fruits, such as by shooting it or climb the tree and collect all the fruit.

Shoot the apple from the palm tree of Rozel and Numar's home.

Breath of the Wild Key Locations[edit][hide][show]
Retrieved from "https://www.zeldadungeon.net/wiki/index.php?title=Lurelin_Village&oldid=454507"
Category: