"Necluda covers the southeastern portion of Hyrule. It is surrounded by tall mountains and is characterized by its sheer cliffs and varied topography. Due to its temperate climate, there are two settlements here: Kakariko Village, where the Sheikah reside, and Hateno Village, home of the Hylians.
The area around Dueling Peaks was ravaged during the Great Calamity, and though it has largely recovered, it is still common to see monsters or the remains of Guardians on Blatchery Plain." 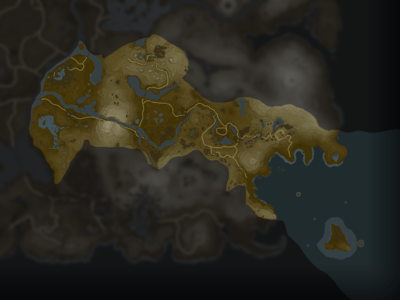 Necluda is a province found in Breath of the Wild. The province itself is split into two parts: West Necluda and the Necluda Sea, both of which are directly east of the Great Plateau, and incorporates part of East Necluda - the exact borders of EN are ambiguous, and may include part of Faron. Its neighboring provinces are Central Hyrule to the west, Faron to the south, and Lanayru to the north.

After the Old Man reveals his true self to you he directs you towards the Dueling Peaks in order to seek out Impa this continuing the main story line of the game.