From Zelda Dungeon Wiki
Jump to navigation Jump to search
Want an adless experience? Log in or Create an account.
Cotera 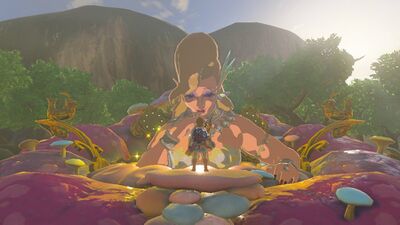 Great Fairy Cotera is a Great Fairy in Breath of the Wild and Hyrule Warriors: Age of Calamity, one of the four sisters.

Cotera's Great Fairy Fountain is located northeast of Kakariko Village. It can be reached by following the path up the incline at the northern edge of the village and then heading east past the Ta'loh Naeg Shrine into the small forest there.

If the player follows the story prompts, Cotera is likely to be the first Great Fairy in the game Link encounters. If unlocked, Lakna Rokee Shrine is closer to the fountain itself, but there's no straight path between the shrine and Cotera's fountain.

According to both Impa and Dorian, Cotera was once an important spirit to the people of Kakariko Village, as she had overseen its construction and supplied it with a form of divine protection. However, they are the only two residents who remember her in the present day. Dorian also alludes to Cotera's presence in the stories he tells to his children, of a sobbing woman who can be heard in the woods behind Ta'loh Naeg Shrine. While this would seem to refer to Cotera, who was trapped within her fountain until Link frees her, the younger Cottla mistakes the crying to be that of her mother, and spends each morning searching for her near the shrine.

If the player follows the path to the northeast of the fountain, a fork will be encountered at the Lanayru Road - West Gate to go north to the Rabia Plain, or southeast to the Lanayru Promenade.

Cotera is battled in the Fairy Fountain: Grassy Plains Challenge scenario. Once Fairy Fountain: Battlefield is completed, the four Great Fairies become available as a composite character, fighting from a single bud.