From Zelda Dungeon Wiki
Jump to navigation Jump to search
Want an adless experience? Log in or Create an account.
Lakna Rokee Shrine 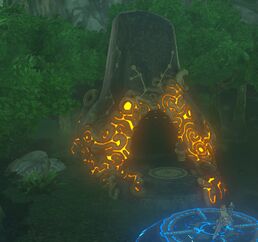 The Lakna Rokee Shrine is one of the many Shrine of Trials from Breath of the Wild.

Alongside Ta'loh Naeg Shrine, it's one of the two Shrines close to Kakariko Village.

Once the required side quests and main quest are complete, visit Impa's house for a cutscene which will begin the Shrine Quest. If Link passes by the guards before entering the house, they'll be on guard and flustered, prompting Link to enter the house. Link finds Paya crying in front of the small altar that had the Sheikah Heirloom Ancient Orb, stating that it was stolen. Impa asks Link to spend the night guarding Paya, who feels vulnerable due to the theft. Once Link does this, the rest of the steps can be taken.

Between 10 PM and 5 AM, look for Dorian, who will begin at his post outside Impa's house, or may be on the path to the Lakna Rokee shrine's location. He should be easily found by the speech bubbles he will occasionally make when he pauses to consider his actions and surroundings.

Follow close enough to keep him moving but without being detected. When he crosses the bridge to the area with the pedestal, he will say 'Show yourself.' Move closer to trigger a cutscene.

You will battle a Yiga Blademaster, which may be a vicious battle if fought early in the game, but it's not unbeatable. Techniques such as Perfect Dodge, or just really strong weapons and defense, will serve you well. Another technique is to get lots of distance and use arrows, particularly enhanced arrows such as Ice or Fire, although once the battle has started, attempting to leave the area will just reset the battle, so be careful not to get too far away. If you die, your auto save may be later than 10 PM, but it's fine. As long as it's before 5 AM, you can still find and trigger Dorian's approach to the destination. At 5 AM he will change his mind and turn around.

It is possible to defeat the Blademaster with the Remote bomb rune, it is a slow process though.

Once the Yiga Blademaster is defeated, place the orb at the pedestal to reveal the shrine, and unlock and head inside to complete the Shrine Quest.

After all that effort, the shrine itself contains no challenges at all. Simply move forward, open the chest, and then examine the altar for your well-earned Spirit Orb.