From Zelda Dungeon Wiki
Jump to navigation Jump to search
Want an adless experience? Log in or Create an account.
Shira Gomar Shrine 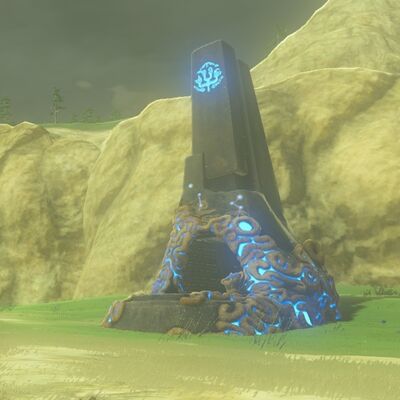 Teleport to Hebra Tower, then glide southwest. Look for a Campfire emitting white smoke on a lower ledge on the north side of the Tanagar Canyon.

At the cliff's edge near the Campfire, you will find a Rito named Mazli, overlooking Tanagar Canyon.

Mazli will tell you that Dinraal flies through the canyon at night and that its "horns light up".

If Dinraal is not already nearby, sit by the Campfire until Night, then run back to Mazli. Dinraal should arrive on your left at around 9:30 pm.

The horns of Dinraal will glow blue at exactly 10:30 pm. Fly towards it when its horns are blue and hit them with an Arrow to reveal the Shrine on the south side of Tanagar Canyon, across from where Mazli was standing.

Given the circumstance that the player has sufficient Bomb Arrows, most of the puzzles involving bombs can be skipped, only requiring for Stasis to direct the large gear platform in order to reach the following section. This, of course, comes at the cost of resources and bow durability.