From Zelda Dungeon Wiki
Jump to navigation Jump to search
Want an adless experience? Log in or Create an account.
Kihiro Moh Shrine 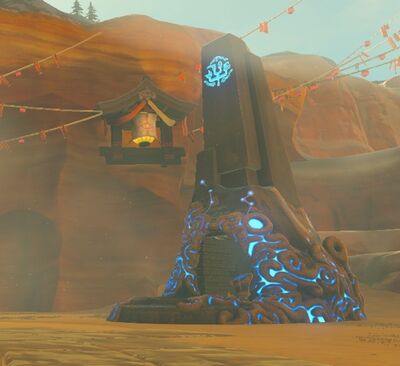 The Kihiro Moh Shrine, also known as Inside the Box, is one of the many Shrine of Trials from Breath of the Wild.

This shrine is located in the open area of the Yiga Clan Hideout, and is accessed during the Divine Beast Tamer's Trial, as a part of The Champions' Ballad DLC pack.

This objective requires Link to return to the Yiga Hideout. Link can warp over to the Kuh Takkar Shrine and then go westward. Link doesn't have to come in through the entrance, in fact, it's much quicker to just go straight to the arena.

Keep in mind that, just like in the first infiltration of the hideout, the Yiga Blademasters can one-hit kill Link regardless of how many Heart Containers have been obtained.

Sneak back inside the Yiga Hideout and the guards are still patrolling the area, albeit in some slightly different spots. Link needs to head towards the entrance of the large room and then climb the tall ladder. The Ancient Orb is located where the large collection of Mighty Bananas were previously found. After getting the orb, Link has to carefully sneak through the hideout to get back to the arena. Toss the orb into the large hole in the center of the arena and the Kihiro Moh Shrine will appear.

Shrine Guide: Inside the Box

The shrine requires Link to get a count of the amount of specific colored Ancient Orbs within the box. Then, if Link looks at the side of the shrine, there are rows with a number of torches, and columns representing the particular colored orb. The solution of the puzzle is:

(*)Note: Not in Roman numerals.

In the last room, there is a secret treasure chest that Link can collect. Turn the large box so that the door is at the bottom. Link can then use Magnesis to open the door, causing the balls to fall out. There are three orbs here that Link can grab with Magnesis. Grab one and place it in the third hole on the side, causing the nearby gate to open. Open the treasure to get a Thunderspear and then talk to the monk to exit the shrine.