From Zelda Dungeon Wiki
Jump to navigation Jump to search
Want an adless experience? Log in or Create an account.
Rota Ooh Shrine 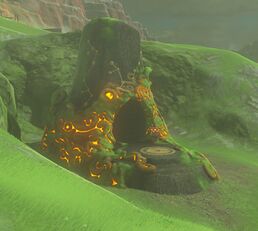 Rota Ooh Shrine, or Passing of the Gates, is one of the many Shrine of Trials from Breath of the Wild.

The shrine is located on the higher hill, just southwest of the Outskirt Stable.

Passing of the Gates

On the right side of the shrine, there is an arrow switch that can be hit, causing the entire structure to rotate. Use an Arrow or a Remote Bomb to hit the switch. Then run along the left side to find a treasure chest with a Small Key.

Now grab the Ancient Orb that is in the center of the shrine and bring it back towards the entrance. Then hit the switch with an arrow once again, reverting the shrine to how it originally was. Use the small key on the locked door, but don't head through just yet.

Next to the arrow switch, there is a small basket like structure within the gate. Pickup the ancient orb and toss it so it lands within the basket. If the orb falls into the water below, try swimming against it, pushing it towards the ramp that leads out of the water. Hit the arrow switch again and it will cause the orb to drop into the hole on the higher side of the shrine. This will cause a nearby platform to act as a launcher. Use the launcher to reach the treasure chest at the backside of the shrine, which contains a Feathered Edge. Or you can simply use Magnesis to get it down.

Return to the launcher again and let it shoot you in the air. While in mid-air, use an arrow to shoot the arrow switch, rotating the structure. Land on the surface, which will allow you to reach the altar. Speak with Rota Ooh to get a Spirit Orb.