From Zelda Dungeon Wiki
Jump to navigation Jump to search
Want an adless experience? Log in or Create an account.
Maritta Exchange Ruins 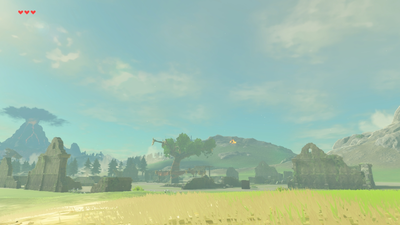 Maritta Exchange Ruins is a location in Breath of the Wild.

The Maritta Exchange Ruins are a rather large area of rubble with a number of enemy Bokoblins and Moblins standing guard. There is a base right in the center of the ruins that has a pair of wooden treasure chests on it. Since there is no natural walkway to reach the base, Link will need to either use Revali's Gale, or stack some of the nearby metal crates on top of each other to climb up. The chests contain five Shock Arrows and a Silver Rupee. There are also numerous rusty weapons, including a Rusty Claymore and a Rusty Halberd.

There is another small enemy camp of Bokoblin to the southwest of the ruins. There is small campfire with numerous Bokoblin. Upon defeating them all, a treasure chest activates containing a Topaz gem. Here there is a massive lookout tower that has a good overview of the nearby ruins. Additionally, when facing southwestward, while standing on the lookout tower, you'll see some boulders up against the wall of the cliff. Link can shoot a Bomb Arrow at these boulders to blow open a cave. This leads to the Maag No'rah Shrine.

Southwest of the ruins, climb the lookout tower and look at the cliff to the southwest. Shoot a bomb arrow to blowup the boulders in the wall. Climb into the cave to find the shrine. The shrine itself is just a blessing shrine, containing a Silver Rupee. Speak with Maag No'rah at the altar to get a Spirit Orb. 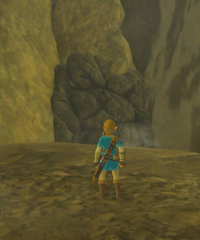 At the bottom of the canyon, blow up the cracked boulders then lift the small rock hidden behind them. 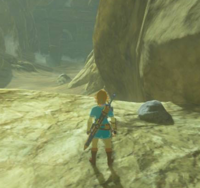