From Zelda Dungeon Wiki
Jump to navigation Jump to search
Want an adless experience? Log in or Create an account.
Mount Rhoam 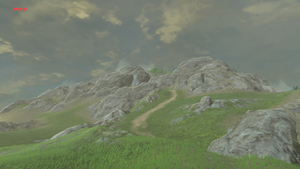 Mount Rhoam is a location in Breath of the Wild, located just north of the Tabantha Bridge Stable and just west of the Thundra Plateau.

At the peak of the mountain, Link can lift a rock to find a Korok. Just north of the peak, there is a small pond with a waterfall. At the top of the waterfall there is a small rock and Link can lift it to find a Korok Seed. In the pond below there are some Hyrule Bass swimming around, as well as some Hot-Footed Frogs in the surrounding area. At the bottom of the pond there is a treasure chest that holds a Knight's Shield. At the southwest part of the pond, there is a wooden treasure chest floating around that contains five Shock Arrows.

To the north is a camp called the Footrace Check-In, where a Hylian called Konba will challenge Link to a footrace to the peak of Mount Rhoam. 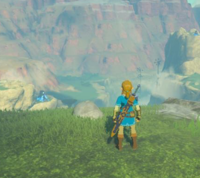 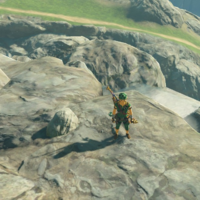