From Zelda Dungeon Wiki
Jump to navigation Jump to search
Want an adless experience? Log in or Create an account.
Grassland Fox 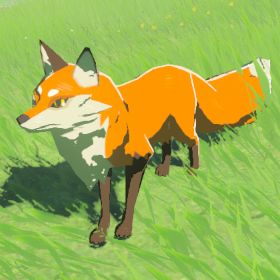 A Grassland Fox is an animal found in Breath of the Wild. They are found all over Hyrule, but especially in forests and meadows. Upon death, they may drop some Raw Meat. This animal will not attack Link when approached, but it may run away, which makes it perfect for beginner hunters.