From Zelda Dungeon Wiki
Jump to navigation Jump to search
Want an adless experience? Log in or Create an account.
Seagull 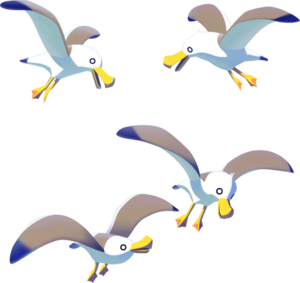 Artwork from The Wind Waker HD

Seagulls are recurring animals in The Legend of Zelda series.

Seagulls appear on occasion in various scenes on Koholint Island, such as while Marin and Link are talking together on Toronbo Shores. Marin loves Seagulls, and she admits to Link while on the beach that she wishes she was a seagull so that she could fly away.[1] If Link manages to complete the game without a single death, Marin appears in the ending credits of the game with wings. In the DX version of the game, Marin's face appears briefly, before fading away into a solitary seagull.

Some seagulls appear in the Great Bay. They constantly circle above Mikau when Link meets him.

Seagulls play an important role in The Wind Waker. Seagulls seem to be attracted to Aryll, and she is the only one they ever approach.[2] She enjoys playing with them at Aryll's Lookout.[3] After Aryll is captured, Tetra is able to identify the room that Aryll is being kept in due to the large amount of seagulls flying outside of its window.[4]

Seagulls also help Link when he places a Hyoi Pear on his head. If a seagull is nearby, it swoops down to eat the pear and Link can temporarily control its movements until it gets hurt.[5] These seagulls can help hit far away switches or even collect a Piece of Heart. Occasionally, Seagulls follow Link while he is at sea. They also gather in great numbers when a Big Octo is near.[6]

Seagulls fly all over the World of the Ocean King. They often follow Link's boat while he is sailing. He can shoot them with the cannon of S.S. Linebeck, and they fall down in the sea.

Seagulls fly alongside the Spirit Train while Link is in the Ocean Realm. He can shoot them with his cannon, then they fly away. Basically, they get hit, slow down, then fly off. However, doves replace the seagulls in most areas. They fall to the ground when shot with the cannon. 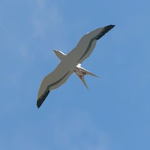 Picture of the Seagull entry (Nº 45) in the Hyrule Compendium

"These birds live near the ocean. They eat mainly fish, so a flock of seagulls hovering over water is a good indication of where there are fish. Fishermen use this to their advantage when searching for a catch of their own."

Seagulls are found near the oceans of Hyrule, often in large groups. They are mostly found in the Necluda Sea and the Akkala Sea, and their presence, alongside alerting Link of the presence of fish, also indicates that there may be circling treasure chests.

Alongside Islander Hawks, they're among the only birds in the game that do not land, only found airborne.