From Zelda Dungeon Wiki
Jump to navigation Jump to search
Want an adless experience? Log in or Create an account.
S.S. Linebeck 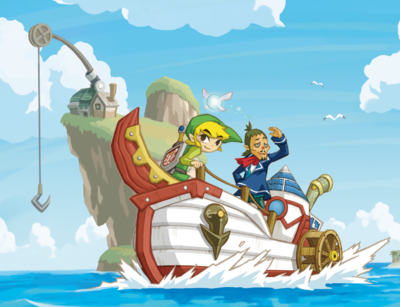 Artwork of the S.S Linebeck

"Any captain worth his salt puts his ship before his own safety, I tell you!"

The S.S. Linebeck is Linebeck's steam powered ship that Link uses to travel the World of the Ocean King in Phantom Hourglass. Link navigates the ship by drawing its path on the Sea Chart, of which it follows. However, at one point in the game, Link uses the steering wheel to drive the boat through fog. Link can purchase new parts and customize the S.S. Linebeck however he pleases.

The S.S. Linebeck is a cheap, low quality ship owned by Linebeck, which he selfishly named after himself. The original S.S. Linebeck parts are ridiculed about just how run of the mill they are. Although the ship is completely worthless, Linebeck is proud of it.

After Link saves Linebeck in the Temple of the Ocean King, he is given control of the S.S. Linebeck. He marks the ships route on the Sea Chart, and the ship follows the route exactly. Link can make the ship stop and go by hitting the start/stop engine button.

However, this is not the only form of navigation in the game. When trying to find the Ghost Ship in the fog, Link must steer the ship manually, following the direction of the fairies of Wisdom, Power, and Courage. The fairies beep to tell Link how close he is.

With different combinations of Ship Parts, the S.S. Linebeck can have more hearts (As the ship will be stronger). There are nine different sets of ships, each with eight different parts making it. A complete set will give more hearts than an incomplete set: