From Zelda Dungeon Wiki
Jump to navigation Jump to search
Want an adless experience? Log in or Create an account.
Rainbow Pigeon 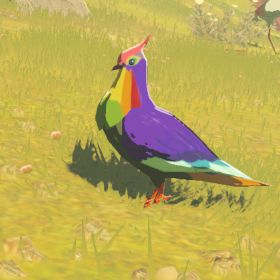 "This breed of pigeon is well known for its vivid feathers. They live mainly in the northern forests and grasslands of Hyrule. They're most fond of nuts and grain but won't pass up the occasional insect or earthworm if offered. Their meat is of a higher quality than a typical wood pigeon's."

A Rainbow Pigeon is an animal found in Breath of the Wild. They are rarely seen in the forests of Hyrule, and tend to fly away when Link nears. Upon death they may drop a Raw Bird Thigh.