From Zelda Dungeon Wiki
Jump to navigation Jump to search
Want an adless experience? Log in or Create an account.
Mountain Crow 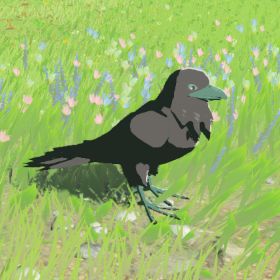 "This bird is known for its cleverness and for its distinct claws. They make their homes in mountains, forests, and villages alike. Not only are their jet-black feathers seen as an ill omen, but they'll steal the crops right out of a farmer's hands if given the chance. Because of this, they're often met with enmity."

A Mountain Crow is an animal found in Breath of the Wild. They make their roost all over Hyrule, such as in the Lost Woods, and tend to fly away when Link nears. Upon death they may drop a Raw Bird Drumstick.