From Zelda Dungeon Wiki
Jump to navigation Jump to search
Want an adless experience? Log in or Create an account.
Stalhorse 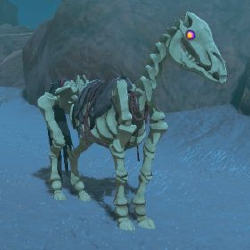 "This skeletal horse is ridden by monsters. It was once a regular horse, but Ganon's power revived it from death. It cannot maintain its bone structure in the daytime."

A Stalhorse is a skeletal Horse found in Breath of the Wild. They can be commonly found in the North Tabantha Snowfield at nighttime. If Link tries to register it at a Stable, they will inform him that it might eat the other horses.[1]

Stalhorses are docile creatures, and since they are ridden by Stalkoblins, they don't have to be soothed to ride. Stalhorses, just like regular horses, do not drop any loot or parts when killed, though unlike those, they don't leave a body behind. They come invariably with 3 spurs of stamina and have 100hp of strength.