From Zelda Dungeon Wiki
Jump to navigation Jump to search
Want an adless experience? Log in or Create an account.
Blupee 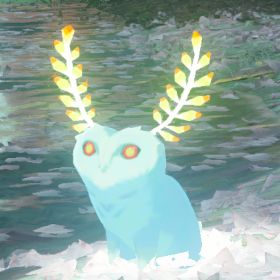 "They may look like mere rabbits at a fleeting glance, but these strange and aptly named creatures glow with a mysterious blue light. While the details of their origins are entirely unknown, there is one thing we do know: these peculiar little things have a penchant for collecting rupees."

Blupees are mysterious creatures found in Breath of the Wild and Age of Calamity.

Blupees are rabbit-like creatures that have owl facial features and moth-like antennae resembling rabbit ears. They tend to glow brightly a light shade of blue during the night and the early morning. They are found in forest areas such as the forest near Kakariko Village. They can be approached slowly, or by using stealth gear, food or elixirs. When shot at, or stricken, Blupees shed Rupees of various lower denominations, not including Silver Rupees or Gold Rupees.

They share several features with the Lord of the Mountain, and are implied to be related to it in a subordinate manner.

They are very skittish in behavior, so Link should be sneaky when approaching them. These creatures drop up to 100 Rupees when hit, and disappear into thin air after fleeing for some time.

Link can find lots of these creatures at Satori Mountain when the Lord of the Mountain is present. They also tend to spawn semi-frequently near Cotera's Great Fairy Fountain by Kakariko Village. If Link takes a picture of one, it has a place in the Hyrule Compendium. He can then target them using the Sheikah Sensor + .

Blupees can also be seen largely in wooded areas, though they are very difficult to spot to begin with. Albeit they're not domesticated animals, like most of those, Blupees cannot be killed.

Having begun the main quests Locked Mementos and The Hero's Sword, the side quest Legendary Rabbit Trial can be accessed in Korok Forest by talking to the Korok Peeks. Peeks requests a picture of a Blupee from Link and, upon completion, rewards Link with a Silver Rupee.

"Rumors: Blue-white, rabbit-shaped spirits have been spotted! It's said warriors skilled enough to strike one will be rewarded!"