Horse (Breath of the Wild) 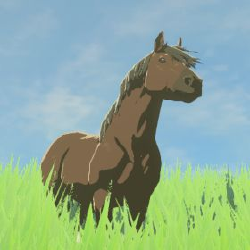 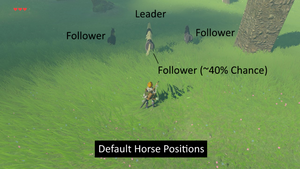 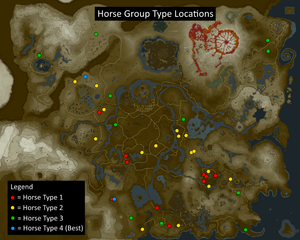 In addition to the standard wild horses, a few special horses can be found in Hyrule: the Giant Horse, the White Horse, the Lord of the Mountain, and the Stalhorse. The giant and white horses can be registered while the other two cannot. As mentioned in the previous section, other tameable animals like stags and bears can be ridden to the stables, but cannot be registered either.

Epona cannot be found within Breath of the Wild, but may be obtained when the player scans certain amiibo. A Super Smash Bros. Link or Twilight Princess Link amiibo will always drop Epona on the first scan. Only one Epona per amiibo can exist in the world at a time; if Epona despawns before being registered, or if she is released from the stable, the same amiibo may randomly drop Epona again with very low probability. However, Epona can be received multiple times from different amiibo, and each Epona received may be registered, making it possible to have more than one Epona in Breath of the Wild. Epona has her own saddle and bridle that cannot be changed, and her bond with Link is already maxed out.

Horses can be customized at a variety of Stables, including the Outskirt Stable, but their bond with Link must be at max before this can be carried out. Every horse except the Giant Horse and Epona can change their saddles and bridles, which can be obtained in different locations around Hyrule.