From Zelda Dungeon Wiki
Jump to navigation Jump to search
Want an adless experience? Log in or Create an account.
White Horse 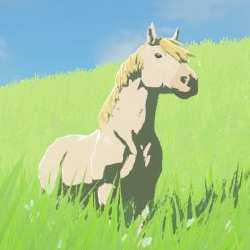 "The Hyrulean royal family that perished 100 years ago would sometimes ride atop white horses as a display of their divine right. This white horse may be a descendant of one once ridden by royalty."

The White Horse is a special type of Horse found in Breath of the Wild. There is only one to be found in Hyrule, and it lurks in the lush fields by Safula Hill, in the Ridgeland Region. This horse may be a descendant of the horse that once belonged to Zelda, as seen in many of the Memories in the game, including To Mount Lanayru and the DLC memory Champion Revali's Song.

Link must tame this horse and ride it back to the Outskirt Stable in order to complete the side-quest The Royal White Stallion; in order to tame the horse, the player must press the soothe button 25 times before Link's stamina runs out. Upon completion of this, Link will be rewarded with the Royal Saddle and Bridle, which are pieces of Horse Armor that only this horse can wear.

Apart from the aforementioned features, the horse presents average statistics compared to other wild horses, as well as excellent stamina at the cost of speed.