From Zelda Dungeon Wiki
Jump to navigation Jump to search
Want an adless experience? Log in or Create an account.
Snowcoat Fox 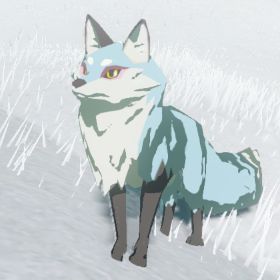 "This particular breed of grassland fox makes its home in cold climates such as the Tabantha region. Its fur turned white as a means of adapting to snowy weather, serving as a natural camouflage. Because of this, spotting one in the snow takes a keen eye."

A Snowcoat Fox is an animal found in Breath of the Wild. They look very similar in appearance to their relative the Grassland Fox, but appear exclusively in the frigid, snowy regions of Hyrule, such as the Hebra Mountains. Upon death they may drop some pieces of large meat, such as Raw Gourmet Meat.