From Zelda Dungeon Wiki
Jump to navigation Jump to search
Want an adless experience? Log in or Create an account.
Honeyvore Bear 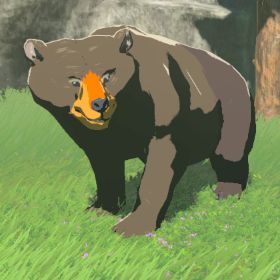 "This king among animals is dangerous game for even the most seasoned hunters. They'll attack anyone who wanders into their territory regardless of the wanderer's weaponry. As their name implies, they have a natural love of honey. Extreme caution is advised when you spot one, but if you're sneaky enough and maybe just a little bit crazy... you may just be able to ride one."

A Honeyvore Bear is an animal found in Breath of the Wild. They are one of the rarest animals in Hyrule, only appearing in a few select locations. By nature, they are aggressive towards Link, but if approached sneakily, they can be tamed and ridden, though they cannot be registered at a Stable. Upon death, they may drop some large pieces of meat, such as Raw Gourmet Meat.

As part of the quest Good-Sized Horse, the Honeyvore Bear cannot be sold to Zyle, as he refuses to buy it since it's not a horse.

The Honeyvore Bear can be found on the Tabantha Frontier and the Akkala Highlands. Specific locations include in the Hickaly Woods in West Necluda and also near Crenel Peak in the Lanayru Wetlands.