"These extensive wetlands cover a broad plain to the southwest of Zora's Domain. There are several islands throughout the shallow lake that are connected with crude bridges. There are the remains of a ruined village on the large island in the middle of the wetlands." 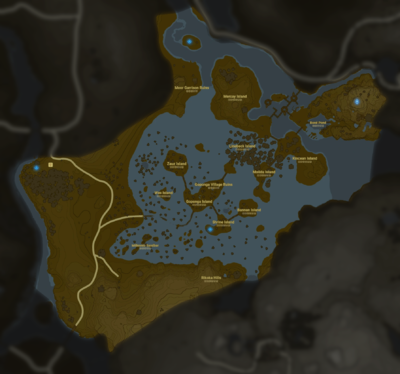 Map of the Lanayru Wetlands in Breath of the Wild

It is a district, largely formed by moorland, in the westernmost part of Lanayru province, which both major rivers from Lanayru Great Spring flow into. It contains one the largest bodies of freshwater in Hyrule in terms of area, similar on size to Lake Hylia but considerably shallower, as ~70% of said area is just knee-deep.

The Wetlands may well be among the first locations where Link may encounter Lizalfos on dry land, as the ones swimming in the river between the Dueling Peaks further south may not alert Link with their presence unless they're first engaged in combat. Also, despite being located in Lanayru, the Wetlands are not plagued with the constant rain of the Zora Domain, courtesy of Vah Ruta.