From Zelda Dungeon Wiki
Jump to navigation Jump to search
Want an adless experience? Log in or Create an account.
Meadela's Mantle 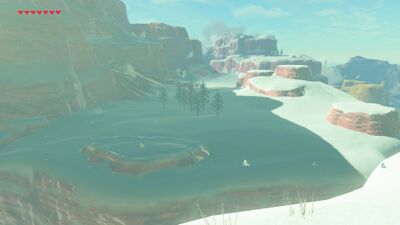 Meadela's Mantle is a location in Breath of the Wild.

The Meadela's Mantle is located near the center of the Gerudo Highlands, just south of the Gerudo Summit. Like much of the region, the area is bitterly cold, requiring Link to wear armor with Cold Resistance in order to survive. Each day between the hours of 6am and 6pm, the area has unlimited sunshine, where as after 6pm, it will revert to cloudy or snowy conditions.

At the south end of the mantle, there is a small hill and, on top of it, there are some sparkling leaves moving around. Catch the leaves to find a Korok Seed.

There are a bunch of treasure chests found throughout the Meadela's Mantle with a variety of goodies. Below is a listing of all treasure chests, roughly in geographic order from west to east. 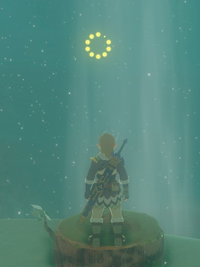 Race to the finish from the platform to the west-southwest. Use the updraft and your paraglider to gain height quickly.

The seed platform for this race starts west-southwest of this position, halfway up the cliff. Race to the ring for the seed.

All Yiga offerings want Mighty Bananas. You can pick them back up after getting the seed. 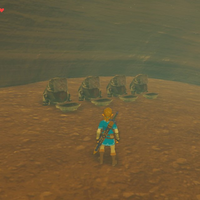 All Yiga offerings want Mighty Bananas. You can pick them back up after getting the seed. 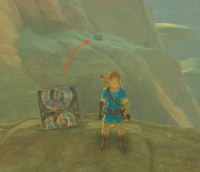 Solve the block puzzle. The block is on top of a pillar to the west. You'll need Level 1 cold resistance where the puzzle is.

Solve the block puzzle using the block to the west. 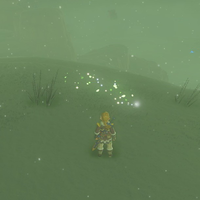