From Zelda Dungeon Wiki
Jump to navigation Jump to search
Want an adless experience? Log in or Create an account.
Risoka Snowfield 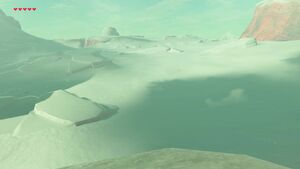 Risoka Snowfield is a location found in Breath of the Wild.

The Risoka Snowfield is a very expansive region at the west end of the Gerudo Highlands. Due to its high elevation, the climate is very cold, requiring Link to wear armor with Cold Resistance, such as the Snowquill Set. Throughout the snowfield there are numerous colder climate enemies as well as tons of hidden treasure that is buried in the snow.

In the overnight hours, it will always be snowing, but it will break out into total sunshine each morning at 6am.

At the west end of the snowfield, the Kema Kosassa Shrine can be found. It is A Major Test of Strength shrine with the Guardian Scout IV wielding a Guardian Spear++, Guardian Shield++, and an Ancient Battle Axe++. The treasure chest within the shrine contains a Silver Rupee. Link can then speak with Kema Kosassa at the altar to get a Spirit Orb.

There are dozens of treasure chests found throughout the Snowfield with a variety of goodies. Below is a listing of all treasure, roughly in geographic order from north to the south. 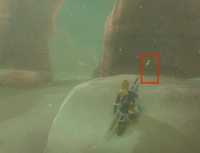 This flower trail starts directly west, at the bottom of the cliff, and requires you to climb straight up. Bring lots of stamina - 3 full bars isn't enough, and you will need to replenish.There is a geyser blocked by a huge Rock to make stuff easier, Rivall gale could also be used.

Follow the flower trail from the bottom of the cliff, just to the west. 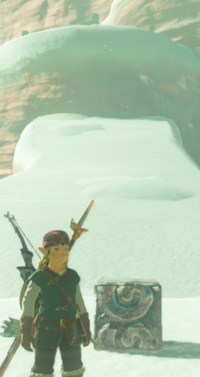 Solve the block puzzle. The block is downhill to the west.

Solve the block puzzle. The missing piece is on the outcropping directly west, guarded by two black Moblins. 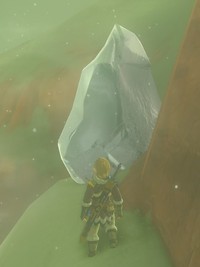 Melt the ice and examine the fairy lights.

Melt the ice and examine the fairy lights.