"The summit of the Gerudo Highlands is covered in snow and has a massive stone sword plunged into it. There is a legend that the sword was once wielded by a forgotten eighth heroine, but that is dismissed as a myth - a folktale offshoot of the legend of the Seven Heroines passed down in the Gerudo region." 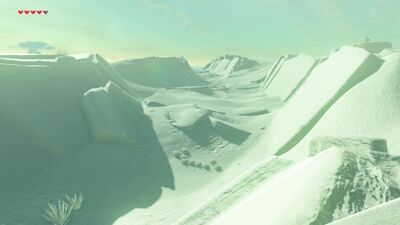 Gerudo Summit is an area in Breath of the Wild.

The Gerudo Summit is located at the peak of the Gerudo Highlands. It is a very cold, snowy climate, with the temperatures being bitterly cold. Link will need to wear armor with Cold Resistance, such as the Snowquill Set in order to survive. The summit has very steep cliffs on all sides, making it rather difficult to climb up. At the southwest portion of the summit, there is a more steady slope that Link can climb up to reach the summit.

At the center of the summit, there is a dangerous White-Maned Lynel that is patrolling the area. The Lynel carries a Savage Lynel Spear and a Savage Lynel Bow.

One of the three dragons, Farosh, will occasionally fly over the Gerudo Summit. While Farosh usually stays a bit to far up in the air to get a good shot at him, Link is able to strike him with an Arrow and can get some rare material. However, It is not recommended to try and farm Farosh's materials here, as it is far easier in the area around Lake Floria. Often after hitting Farosh, the materials will appear way down the cliffs, making it a bit of an annoyance to have to get them.

There are four Koroks that can be found on and around the summit. Three of them are all next to each other at the west end of the summit. One requires Link to pickup a series of yellow flowers. It begins was down at the Risoka Snowfield, just south of the overhang. This requires quite the amount of Stamina and Link will likely need some stamina elixirs to get all the flowers. A second Korok is located at the west end, near the overhang. There is a block puzzle on the higher ledge to the east, with the missing block being all the way to the west, guarded by a pair of Black Bokoblin. Use Magnesis to grab the block and put it in its right location to get the Korok Seed.

At the far northwest end of the summit, there is a tree stump that creates a yellow circle. Race to the southwest, using the wind geyser for an extra boost to get the Korok.

As part of The Forgotten Sword side quest, Link will need to take a picture of the giant sword. The sword is found on the top plateau, in the southeast area, southeast of where Link fought a White-Maned Lynel.

On a lower elevation, just northeast of the Summit, there is a large thunderbolt symbol. As part of the Cliffside Etchings shrine quest, which Link gets by speaking with Geggle over at the Tabantha Bridge Stable, Link can shoot this thunderbolt symbol with a Shock Arrow. This will cause the Keeha Yoog Shrine to appear, completing the quest. The Shrine is a blessing shrine, so Link can open the treasure chest and then meet with Keeha Yoog at the altar to get a Spirit Orb.

There are dozens of treasure chests found throughout the Gerudo Summit with a variety of goodies. Below is a listing of all treasure chests, roughly in geographic order from west to east. Be careful though, as many of the treasure chests buried in the snow are fake and actually Treasure Octoroks enemies. The way to tell, is Link can only use Magnesis on real chests.