From Zelda Dungeon Wiki
Jump to navigation Jump to search
Want an adless experience? Log in or Create an account.
Eighth Heroine 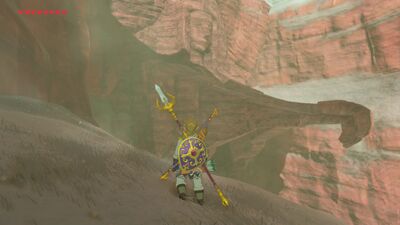 The Eighth Heroine, also known as The Bronze Giant, is an object in Breath of the Wild.[1] The Seven Heroines are massive statues found at the East Gerudo Ruins, just southwest of the Wasteland Tower. They play a part in The Seven Heroines shrine quest, given by Rotana in Gerudo Town. However, a rumored eighth heroine was believed to exist, with rumors of its appearance up in the Gerudo Highlands.[2]

The Eighth Heroine is found at the northwest end of the Gerudo Highlands, located just north of the Risoka Snowfield.

Link can find Bozai, a Hylian male running around the perimeter of Gerudo Town. If Link speaks to him while wearing the Gerudo Clothes, Bozai will task Link with finding and taking a picture of the Eighth Heroine. Although Bozai doesn't actually think that the Eighth Heroine exists, and instead, is putting Link up to this task, just so that he can get closer to him.[3] After Link finds the statue and takes a picture of it, he can return to Bozai to show it to him. Bozai will reluctantly agree to give the Sand Boots as a reward.[4] 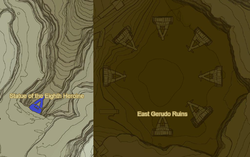 The statue's position and orientation, compared to the Seven Heroines statues
Retrieved from "https://www.zeldadungeon.net/wiki/index.php?title=Eighth_Heroine&oldid=315367"
Categories: