From Zelda Dungeon Wiki
Jump to navigation Jump to search
Want an adless experience? Log in or Create an account.
Vatorsa Snowfield 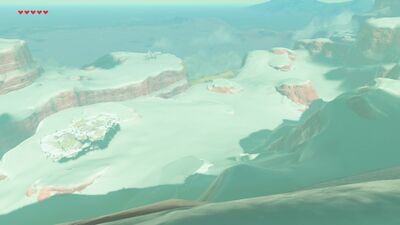 The Vatorsa Snowfield is a location in Breath of the Wild. It covers a small area within the Gerudo Highlands.

The Vatorsa Snowfield is a cold and snowy area, found in the center of the Gerudo Highlands. Like much of the region, it is bitterly cold and Link will need armor with Cold Resistance, such as the Snowquill Set, in order to survive. While not named on the map, the West Vatorsa Snowfield is an area at the snowfields west side, with a Stone Talus.

At the far northwest end of the area, there is a Bokoblin camp with some dangerous Blue Bokoblin and Black Bokoblin. After defeating all of the enemies, a treasure chest unlocks containing a Ruby gem. A massive enemy base can also be found near the center of the snowfield, with multiple Black Moblin and a Black Bokoblin. A wooden treasure chest can be found at the top with five Bomb Arrows.

Just south of the Kuh Takkar Shrine, on the higher ledge, there is an ice block. If Link melts the ice block, he can find a Korok. Just northwest of the shrine, there is a bridge that extends over the slope. At the west end of the bridge, solve the block puzzle to get another Korok Seed.

There are a bunch of treasure chests found throughout the Vatorsa Snowfield with a variety of goodies. Below is a listing of all treasure chests, roughly in geographic order from west to east. 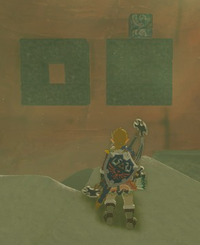 Solve the block-puzzle by using Magnesis.

Solve the block-puzzle by using Magnesis.