From Zelda Dungeon Wiki
Jump to navigation Jump to search
Want an adless experience? Log in or Create an account.
Sapphia's Table 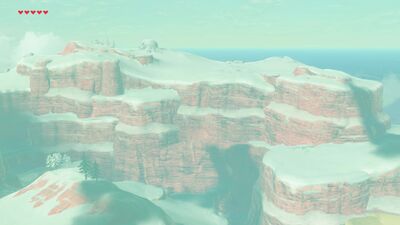 Sapphia's Table is an area in Breath of the Wild.

At the southeast end of the table, there is an enemy skull base that has some Blue Bokoblin, Black Bokoblin, Ice Keese, and a number of Ice ChuChus. Some of the Blue Bokoblin in the area can be dangerous as they wield bows with Ice Arrows. Inside of the skull base, there is a treasure chest buried in the snow that contains a Purple Rupee.

Just north of the table, there are a circle of rocks at the lower elevation. Place the missing rock in the spot along the circle to find a Korok Seed.

There are a bunch of treasure chests found throughout Sapphia's Table with a variety of goodies. Below is a listing of all treasure chests, roughly in geographic order from west to east.

Find a rock just to the east of the rock circle. Walk along the narrow cliff path to complete the pattern.

The rock is just to the east past the narrow ledge.