From Zelda Dungeon Wiki
Jump to navigation Jump to search
Want an adless experience? Log in or Create an account.
Kuh Takkar Shrine 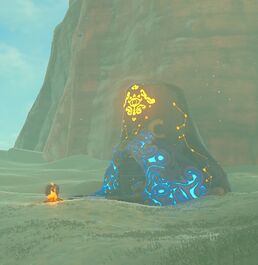 Kuh Takkar Shrine is one of the many Shrine of Trials from Breath of the Wild. The shrine provides the closest Travel Gate to the rear entrance of the Yiga Clan Hideout.

The shrine is located at the far east end of Vatorsa Snowfield. Use a fire based weapon, Fire Arrows, or stacks of Wood lit with Flint to melt the ice that is encasing the shrine. The shrine is guarded by two Ice Wizzrobes, which can be immediately killed with fire weapons. Once the ice is completely melted and the shrine is accessible, the Wizzrobes will not appear again.

The objective of this shrine is to carry the ice cube past a lot of flames, and bring it all the way to Kuh Takkar at the altar.

Grab the ice block and simply walk by the first flames. Link can just hug against the wall and walk right by. For the rotating flame, Link will need to time it and then quick run through. He can also toss the ice block and then go and pick it back up.

Put the ice down for a moment, as there is a short diversion. There are some nearby vertical flames towards the center of the shrine. Use the metal block to place them on top of the flames. Then glide on over and open the treasure chest that is behind the flames to get a Frostblade. You can easily get back up by climbing the nearby ladder.

Carry the ice to the gate and it will open. Run over to the altar to speak with Kuh Takkar to get a Spirit Orb.