From Zelda Dungeon Wiki
Jump to navigation Jump to search
Want an adless experience? Log in or Create an account.
Mah Eliya Shrine 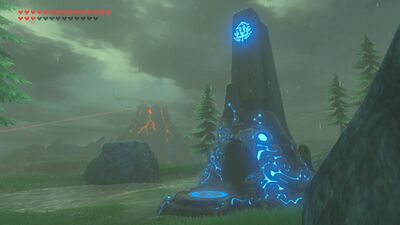 The Mah Eliya Shrine, also known as Secret Stairway, is one of the many Shrine of Trials from Breath of the Wild.

This shrine is located near Lulu Lake, and is accessed during the Divine Beast Tamer's Trial, as a part of The Champions' Ballad DLC pack.

Just east of Zora's Domain, make your way towards Mikau Lake. Here you will find a glowing blue circle. Walk through it and another circle will appear towards the waterfall. Equip your Zora Armor and use the ability to swim up the waterfall to go through a series of blue circles. You'll have to make your way up three waterfalls, ending at the top of Lulu Lake. Successfully doing it in time will cause the Mah Eliya Shrine to appear.

You will find two large metal crates that are attached to the wall on rails. Note that there is a waterfall behind them as well as water beneath them. First we need to raise the one on the left, so use Cryonis to create and ice block and then climb up. On the higher ledge to the left, you will find another block, so grab with Magnesis and toss it down below. Now using Cryonis and the three blocks, you need to create a staircase that is four levels high to reach the highest platform. Just follow these simple steps.

This will raise the blocks four levels high and you should be able to climb up to the top to complete the shrine.

Once at the top, turn around and look high at the wall across from you to find the chest (Royal Shield). The easiest way to get this chest down is by shooting near it with a bomb arrow.

Alternatively, this puzzle can be solved relatively easily using Stasis. This requires a quick hand and a two-handed weapon.

Essentially, you are performing a vertical Stasis launch on the block to gain air. If done successfully, the block will launch upwards, throwing you high up in the air. As you paraglide down, look to the left. You will see a small ledge with a treasure chest with Royal Shield. Pick it up, and glide off to collect Ruta's Emblem.

Climb up the left large metal crate and drop some Octo Balloons. One Octo Balloon is not enough to lift the crate. Two Balloons will lift it but they will pop the moment you reach the top. Three Balloons gives about three seconds at the top where you can use Magnesis to grab the treasure chest (Royal Shield) on the platform to the left .

Use the same Balloon trick on the right crate to reach the end of the shrine.