From Zelda Dungeon Wiki
Jump to navigation Jump to search
Want an adless experience? Log in or Create an account.
Shee Venath Shrine 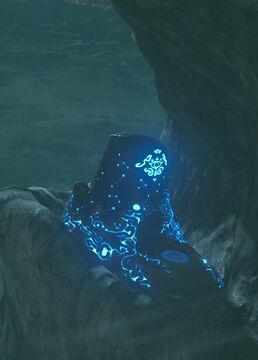 "The shrines atop these peaks share a connection—their memory the answer to the other's question. Commit to memory before you start, lest, a failure, you will depart"

— Prompt from the shrine's corner headstone inside

The Shee Venath Shrine, also known as Twin Memories, is one of the many Shrine of Trials from Breath of the Wild. It is the sister shrine to the Shee Vaneer Shrine.

This shrine is located near the peak of the northern Dueling Peaks mountain range, underneath the peak in the interior side of the mountain. It can be reached by climbing the mountain from the north, or by paragliding down from the southern peak, which has a higher cusp.

While this is not strictly a requirement, in order to solve this shrine without assistance, you must also unlock and enter the Shee Vaneer Shrine.

The shrine is almost directly above Ree Dahee Shrine, which is some meters above ground level inside the mountain gap. This makes them the mutually closest shrines in the map, though their vertical distance is considerable comparatively. 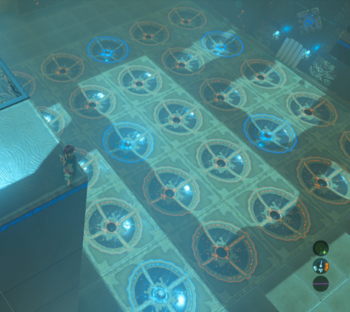 Solution to the puzzle.

Before moving any of the orbs, ride the elevator up, and then glide around the column to the other side to open a chest containing a Serpentine Spear.

From the top of the platform, you can look down and see the 5x5 grid below and where the orbs are placed. Before touching any of the orbs, you can jot down where they are currently located as you will need this information to solve the Shee Vaneer Shrine. Link will need to move the five orbs to specific locations, of which the solution can be found at the Shee Vaneer Shrine.

When facing the locked door, each orb fits in the grid like so (✓ is where the orb is; ∅ is empty):

After the gate opens, climb the ladder and examine the altar to collect the Spirit Orb.