From Zelda Dungeon Wiki
Jump to navigation Jump to search
Want an adless experience? Log in or Create an account.
Kam Urog Shrine 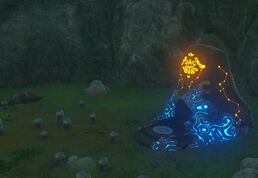 Kam Urog Shrine, known as the Trial of Passage, is one of the many Shrine of Trials from Breath of the Wild.

The shrine can be found along the road, just east of Fort Hateno. When passing by the Cliffs of Quince, Link can head north to find a graveyard of headstones. Link will need to complete The Cursed Statue quest in order to enter the shrine.

Talk to Doctor Calip to start this quest. During the evening and overnight hours he can be found inside his cabin, located directly east of Fort Hateno. During the daytime, he can be found examining the graveyard of headstones. After acknowledging he is a doctor, this will begin the Shrine quest.[1]

Near the graveyard of headstones, just after 9pm, one of the statues' eyes will starting glowing purple. Shoot this statue with an Arrow to complete the Shrine Quest and reveal the Kam Urog Shrine.

To exit the shrine, ride one of the large platforms up the side of the wall and then glide over to the lower stairs which are located right behind a wall of lasers. From here wait until the staircase moves into place, allowing you to run up to the exit of the shrine. You can uses Stasis on the nearby gear to freeze the staircase in place. Run up to the altar and speak with Kam Urog to get the Spirit Orb.

During the E3 Treehouse Presentation, the shrine was referred to as the Shrine Kalm Yu'ogh and was given the sub-name, Trial of Passing.