From Zelda Dungeon Wiki
Jump to navigation Jump to search
Want an adless experience? Log in or Create an account.
Toh Yahsa Shrine 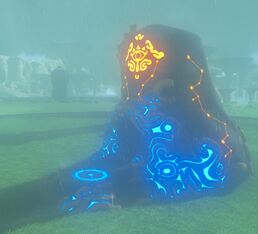 Toh Yahsa Shrine, also called 'Buried Secrets, is one of the many Shrine of Trials from Breath of the Wild.

Once Link arrives at the Thundra Plateau, this will begin the Trial of Thunder shrine quest. The goal is to get the four colored orbs to their corresponding slots on the plateau. This objective becomes much easier if Link has already acquired Revali's Gale, but can be accomplished with out.

The purple orb is already on the plateau next to its corresponding slot. The green orb is on a tall statue next to its slot. Link can use Stasis and a couple arrows to knock it down.

The red and orange orbs, are off the plateau, at higher elevations. Link will need to use Stasis to build up enough energy to knock them to the plateau where the slots await. Once all four orbs are in the correct positions, the shrine will appear and complete the quest.

The first step is to destroy all of the cracked blocks found throughout the shrine, including the bombable block that is located right beneath the entrance to the shrine. Just below the shrine's entrance there is a treasure chest that contains the Rubber Armor, one of the items that are a part of the Rubber Set. It's not necessary to clear the shrine to obtain the Rubber Armor.

A second treasure chest can be found on the very tall pillar on the right side, as you enter the shrine. Link will need to use Magnesis on the large the metal block, or on the opened treasure chest that he already got. While holding either of these objects with Magnesis, Link can knock down the chest off the pillar and open it to get an Opal gem.

Next, position the metal block so Link can cross the gap and climb the first ladder.

Once Link has climbed the ladder, use Magnesis again to position the block on the massive floor switch, just beneath the altar. This will open the gate, leading to Toh Yahsa, where Link can collect the Spirit Orb.